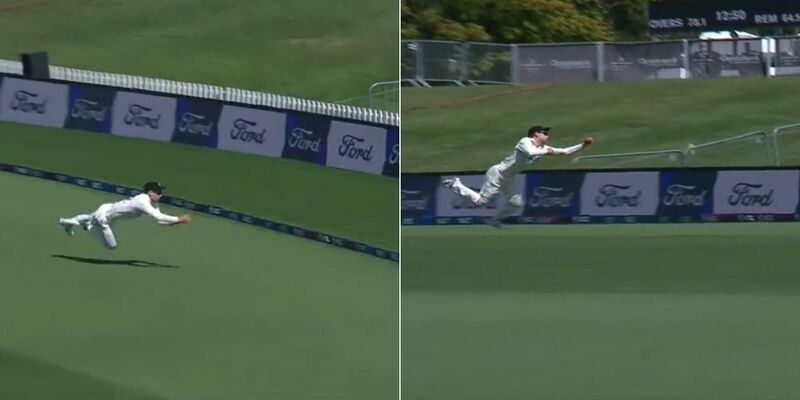 Cricket is full of surprises and, as per the number of games being played on a daily basis, one can see many exciting performances from the players. But today we are discussing one of the best catches you will ever see. And it was New Zealand batter Will Young who took a stunning one-handed catch at the boundary. Young took an incredible diving catch of South African all-rounder Marco Jansen.

South Africa and New Zealand are playing the second test match at Christchurch. And it happened during the 79th over of the second innings for South Africa. Colin de Homme was bowling to Marco Jansen. And on the second ball of the over, Jansen flicked it to the leg side.

It looked like it would easily sail over the boundary line. But then came the dive from Young. The Kiwi fielder took the catch, hanging airtime. And arguably, it could be the best catch in the test cricket, one can see.

A simply outrageous catch from Will Young is our @ANZ_NZ Play of the Day from Hagley Oval! #NZvSA pic.twitter.com/iRWNvriqja

And it ended the fighting innings of the South African all-rounder who scored 9 runs from 41 balls. New Zealand have already won the first test and have a lead of 1-0 in the two-match test series. The 29-year-old was dismissed for a two-ball duck by Kagiso Rabada. But it was South Africa who took the control on the Day 4. Chasing the target of 426, the kiwis lost some early wickets.But a gutsy half-century from opener Devon Conway stopped the collapse. Still, the hosts need 332 runs on Day 5 with only six wickets in hand.

For South Africa, Keshav Maharaja and Kagiso Rabada both have taken two wickets each in the second innings. It will be an eventful day on the last day of the test match.