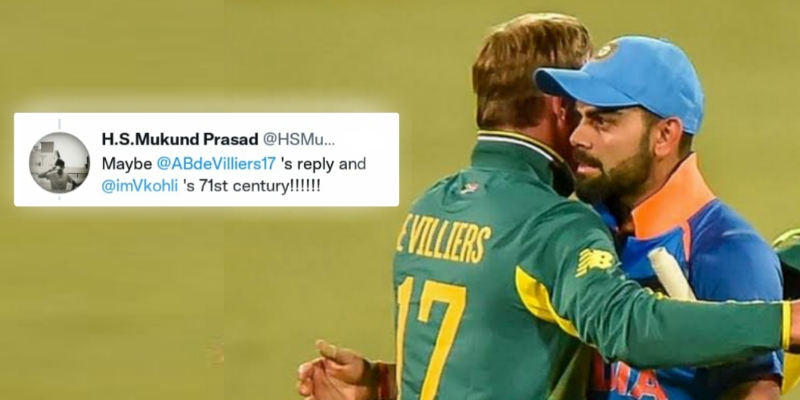 Virat Kohli and AB De Villiers are like a brother from another mother as the Royal Challengers Bangalore duo are one of the many best friend duos in the Cricketing world.

Both Virat Kohli and AB De Villiers are one of the most valuable players of their Indian Premier League franchise Royal Challengers Bangalore (RCB) and IPL itself. Virat Kohli has also mentioned in the past that AB De Villiers is like a cricket guide to him.

Just recently, a fan made a wish which includes both Virat Kohli and AB De Villiers in the wish, and the fan was fortunate enough to get a reply from ABD. But what was the wish ?

Recently Myntra posted on their Twitter account, “”What are you adding to the cart right now?” In reply to which, a fan commentated that he wants Virat Kohli to score his 71st century as well as a reply from AB De Villiers.

The former South Africa international wicketkeeper batsman noticed the comment and he replies below that, “”One down, now for the other”, basically he meant that the fan’s wish of getting a reply from DE Villiers is done, now Virat Kohli’s 71st century is pending.

Virat Kohli has enjoyed success all over in his short cricket career and have broken records after records, he is not only the one of the best player for the Indian team but also one of the best in the world.

But the last 2 years have been rough one for Virat Kohli as the talismanic batsman have failed to touch the three-figure mark in Test cricket from last 2019.

He scored a brilliant 254 against South Africa at the Maharashtra Cricket Association Stadium while the rounded off the year 2019 with a century against Bangladesh at the Eden Garden.

Both Virat Kohli and AB de Villiers will be seen in action again when they take the field in the phase 2 of the IPL 2021 for Royal Challengers Bangalore, but currently Kohli is away in England playing Test series against the Three Lions.