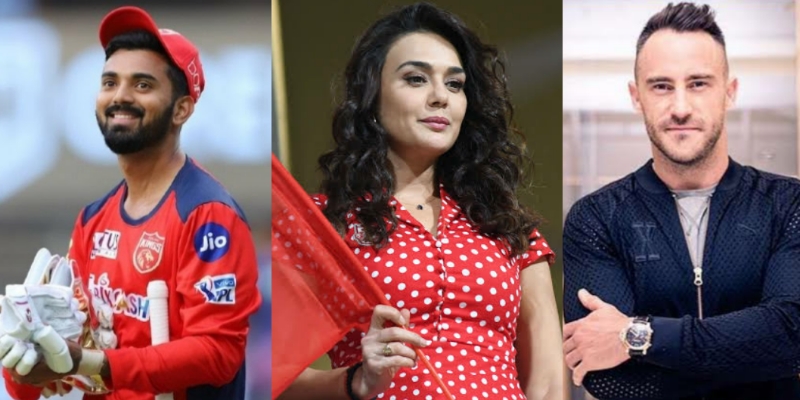 Preity Zinta is a well-known Bollywood actress. She has made a name for herself with her fantastic performances on the big screen. Preity has not been so active in Bollywood these days, but back in 2008, she became one of the B-Town celebrities to buy a team in the Indian Premier League.

Preity Zinta became one of the co-owners of the Kings XI Punjab, now known as Punjab Kings in the IPL. Along with Preity, Mohit Burman, Ness Wadia and Karan Paul also co-own the Mohali-based IPL franchise. After establishing themselves as one of the top franchises in T20 cricket, the Punjab Kings made investments in the Caribbean Premier League and bought the St. Lucia-based franchise.

Recently, the Punjab Kings renamed it to the St. Lucia Kings. Now, in this article today, we will form a strong playing XI from the squads of both teams owned by Preity Zinta.

The Indo-South African pair of KL Rahul and Faf du Plessis will open the innings for this XI. Rahul is the captain of the Punjab Kings in the IPL. He has been one of the most consistent batsmen across the world in the shortest format of the game. Rahul will also keep the wickets for this XI.

Opening the innings along with him will be former South African captain Faf du Plessis. While du Plessis plays for the Chennai Super Kings in the IPL, he is a member of the St Lucia Kings in the Caribbean Premier League. This opening pair can destroy any bowling attack of the world.

All four members of this playing XI’s middle-order are from the Punjab Kings squad. Chris Gayle is the most successful T20 batter in the world, while Dawid Malan is among the top-ranked batsmen in the T20I format. Nicholas Pooran has the capability to turn the game in just a few deliveries.

Pooran and Matthew Wade competed for a spot in the middle-order of this team. However, Pooran edged Wade because of his brilliant fielding skills. Shahrukh Khan will bat at number six. He had performed well for the Punjab Kings in the first phase of IPL 2021.

Deepak Hooda and Rahkeem Cornwall will be the two spin-bowling all-rounders of this playing XI. Both players can hit the ball hard and can score heaps of runs in the slog overs.

They can also change the game by chipping in with a few wickets in the middle. Hooda is a member of the Punjab Kings squad, while Cornwall will play for the St. Lucia Kings in the Caribbean Premier League.

Mohammed Shami and Wahab Riaz will form the pace attack of this playing XI. Riaz is one of the top T20 bowlers in Pakistan, while Shami has been a wicket-taking bowler for the Mohali-based franchise in the IPL.

Ravi Bishnoi will be the sole leg-spin bowler in this team. He will have the support of Deepak Hooda, Chris Gayle and Rahkeem Cornwall in the spin attack.