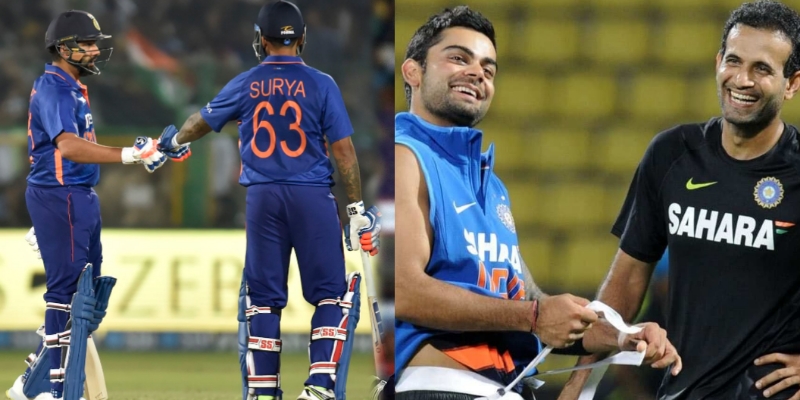 The Indian cricket team today is one of the most strongest and most successful team in the world of cricket. Indian team became the first team after West Indies to win a World Cup in 1983 and also won the 2007 T20 World Cup, the inaugural edition of the competition.

Indian team today is as successful as because of its players, especially in opening position. Over the last few decades, India have had some great opening pair, whether you said Tendulkar and Ganguly, Tendulkar and Sehwag or Rohit Sharma and Shikhar Dhawan.

The opening pair have given India a good start in majority of the matches that allowed India to post a big total on the board. However, there has been a couple of instances when Team India fielded an unusual opening pair.

Today in this article, we take a look at 4 unusual opening pair India have played in the last 2 decades or so.

During a India vs Sri Lanka match in the year 2008, Team India opted with Virat Kohli and Irfan Pathan to open the inning. While Kohli maybe capable of opening being accustomed to batting at number 3 (but he was very young then), but Irfan Pathan is a all-rounder and mainly bats at number 7. The duo added only 8 runs though for the first wicket.

Ambati and KL Rahul opened the inning for India in their 2018 Asia Cup match against Afghanistan. While KL Rahul is normally a opener, Ambati Rayudu was mainly playing at number 4 or 5 during that time for India. However, the experiment was very successful as both scored 50 plus runs, however, it was never carried forward.

Team India toured the African country Zimbabwe for limited overs series in 2013. During that series, in a particular match, team India opted to open with Shikhar Dhawan and Cheteshwar Pujara. Pujara is and was a Test player mainly even at that, thus it was quite unusual to see him open. The experiment didn’t work either as Pujara was dismissed for 0.

The latest in our list is from last night’s match between India and West Indies. During the 1st T20I between the two, India opted to open with Rohit Sharma and Suryakumar Yadav. While Rohit is India’s normal opening batsman, it was quite surprising to see Suryakumar opening the inning. He mainly bats at number 4 or 5 but was promoted for the series. However, he did well as he gave India a fast start and added 24 runs from 16 balls.