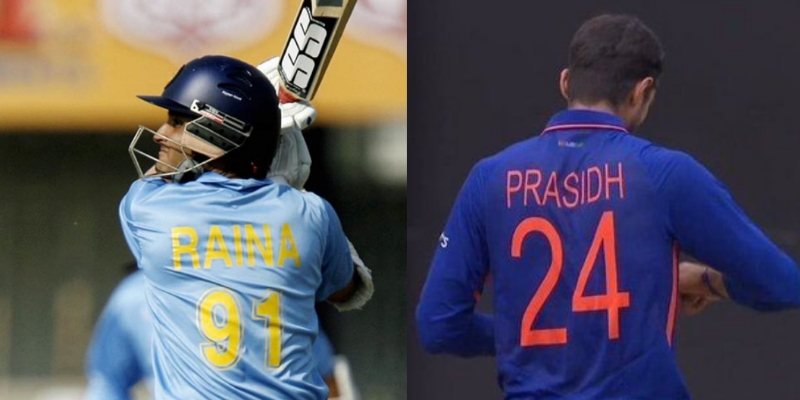 Every player who dreams of playing cricket for his country, for the Indian National team from a young age, that moment is very special for him when for the first time he gets the jersey of Team India with his name written on it.

We cannot even imagine how a player would feel after wearing it. But it can definitely be said that no one can be more proud of that player than this. You must have often seen that some numbers are printed on the back of players’ jerseys, which every player can choose according to his wish.

There have been many such players in international cricket whom their fans also recognize by their jersey number. These include the likes of legendary players like Virat Kohli, Sachin Tendulkar, Rohit Sharma and Mahendra Singh Dhoni (MS Dhoni) etc.

However, many a time we have seen players of the Indian team playing wearing the jersey of their fellow teammate due to some reason.

In this article, we mention about 3 instances when Indian players were seen playing wearing the jersey of their fellow teammate.

The friendship of former India captain MS Dhoni and Suresh Raina is quite famous to everyone. From the Indian cricket team to the Chennai Super Kings in the IPL, both have played together. Dhoni played the last match of his Test career against Australia in December 2014. After the third match of the series, Dhoni said goodbye to Test cricket.

With this decision of Dhoni, not only his fans but also his fellow players of Indian team were emotional. In the fourth match of the series played in Sydney, Raina was seen playing in Dhoni’s Test jersey which Dhoni had given him after the third Test. Let us tell you, this Test played in Sydney was the last Test of Raina’s career as well.

In 2007, the West Indies team was on tour of India and a four-match ODI series was played between the two countries. In the first two matches of the series, former India captain Sourav Ganguly played wearing the jersey of his fellow teammate Suresh Raina, the reason behind which was the lack of proper fitting in his jersey. In these two matches, Ganguly scored 98 in the first match, 13 in the second and India won both the matches.

The Indian cricket team is currently on a tour of West Indies where the Men in Blue most recently walked out with a 3-0 win in the ODI series. However, in the second match of the series that was played on Sunday, 24th July in Port of Spain, all-rounder Deepak Hooda was seen wearing Prasidh Krishna’s jersey.

Prasidh Krishna was not part of the Indian playing XI in the second match thus Hooda had the availability, however it is not known as to why Hooda wore Krishna’s jersey. Hooda took a wicket in the match while bowling 9 overs and gave way 42 runs.