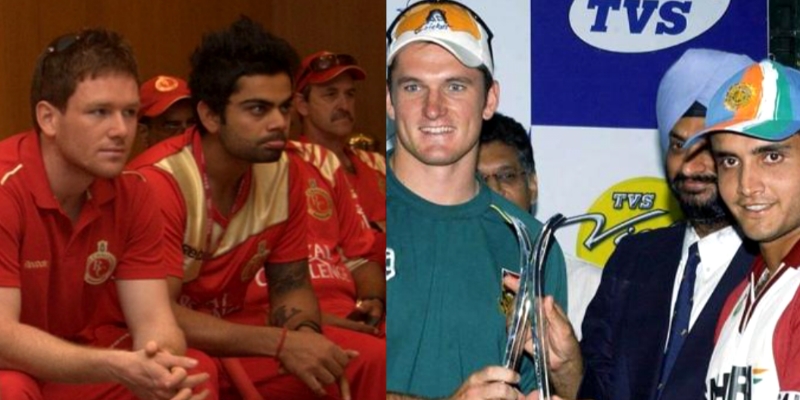 Though there is existence of number of T20 cricket leagues around the world, the Indian Premier League (IPL) is by far the most successful and most followed T20 cricket league in the world. IPL has millions of fans not only in India itself, but throughout the world.

The Indian Premier League (IPL) was first played in the year 2008 and has been graced by some of the top players from around the world. The legends of the game, the likes of Sachin Tendulkar, Sourav Ganguly, Ricky Ponting, Adam Gilchrist, Kumar Sangakkara, Lasith Malinga and AB de Villiers are just a drop of names.

However, the competition has past back till 2008, thus, there many fans who have started following the league off late and might not know a lot, such as, there have been some popular players who have been teammates, but not a lot of them know that.

Today in this article, we take a look at 4 popular players who have been teammates in IPL but a very few know.

Virat Kohli has been a part of the Royal Challengers Bangalore (RCB) ever since the start of the tournament, while Eoin Morgan is mostly known for his stint with KKR and SRH, but, many may not know that Virat and Morgan were teammates in IPL 2010 at RCB. However, Morgan didn’t had a good season for the Bangalore based side.

David Warner and AB de Villiers are two of the most popular and world-class players to play in the IPL. David Warner today is among the top run scorer of the league while de Villiers has entertained everyone with his 360 batting. But, many may not know that both Warner and ABD were teammates in IPL 2009 while playing for the Delhi Daredevils (now Delhi Capitals).

Sourav Ganguly and Greame Smith are considered two of the greatest skipper ever to have played the game. Sourav built a new renaissance while Smith was very successful with his leadership qualities for India and South Africa respectively. However, very few many know that the duo played together for the Pune Warriors India in IPL 2012.

Yuzvendra Chahal and Kuldeep Yadav are both fondly called as KulCha by the experts and the Indian cricket fans. The duo ripped many batting unit with their spin bowling while playing for India. While you may not have seen both together, they were part of the Mumbai Indians in IPL 2012. But due to huge competition, both were not retained.