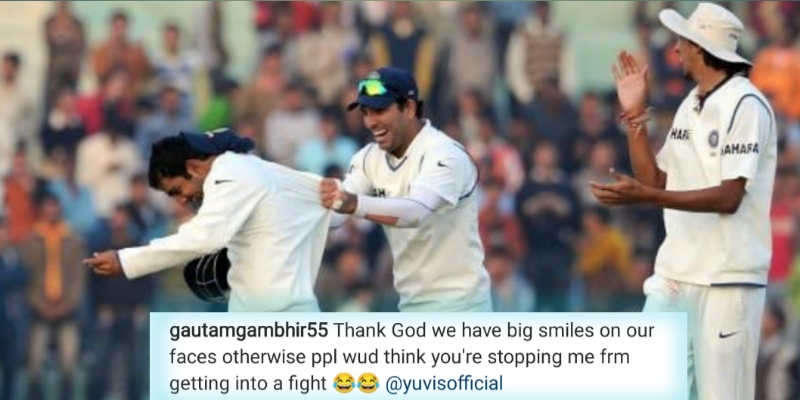 We have often seen former, and even active cricketers engage in banter on social media. While Yuvraj Singh is known for it, Gautam Gambhir is more of a serious character on and off the field. On a recent occasion, though, he showcased his wittier side. Yuvi also had a humorous reply to it. In this article, we take a look at Yuvraj Singh’s hilarious response when his former teammate Gautam Gambhir tagged him in a photo on Instagram.

Pillars of Indian batting line-up at one point

Yuvraj Singh and Gautam Gambhir were, at one point, pillars of the Indian batting line-up in limited-overs cricket. They were the only southpaws in the XI, and more often than not, the duo used to deliver with the bat. In fact, in both of India’s victories in the 2007 T20 World Cup and the 2011 50-over World Cup, Gambhir and Yuvraj had a telling influence.

After retirement, while Gambhir entered politics, Yuvi is often busy with various events and some leagues outside India. The duo has not displayed their friendship often, but in one of the recent Instagram posts, they did show that they are good buddies.

Gautam Gambhir recently posted a photo of Yuvraj Singh tugging at his shirt. The picture seems to be from a Test match that both played in. Gambhir captioned, “Thank God we have big smiles on our faces otherwise ppl wud think you’re stopping me frm getting into a fight @yuvisofficial.”

Yuvraj Singh replied, “I always had to do that to stop you from getting into a fight.” Considering that Gambhir is known to be a strict character and Yuvraj Singh the exact opposite, the conversation seemed interesting and hilarious.