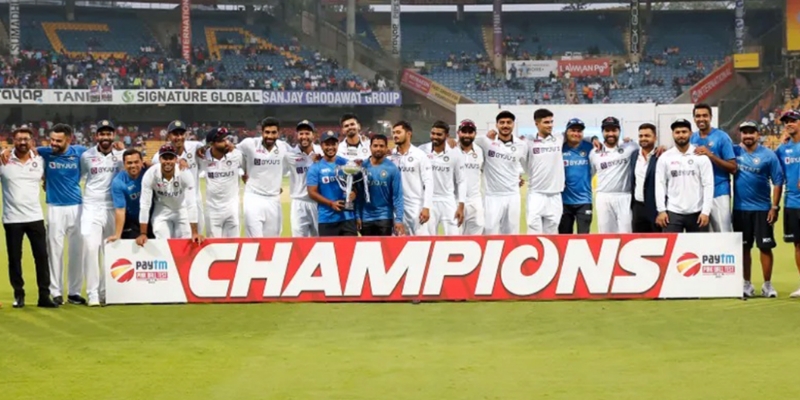 After registering another big win against Sri Lanka by 2-0 in the 2 match Test series, Team India has now overtook Sri Lanka to take fourth place in the ICC World Test Championship 2021-2023 Points Table.

The Indian cricket team, under the leadership of Rohit Sharma, picked up another win against Sri Lanka to win the 2 match Test series 2-0. Team India continued their dominance over the Sri Lankan side throughout the series, whether it is the T20Is or Test series.

In the 2nd Test in Bengaluru, the Day and Night Test match, India registered a win by 238 runs to wrap of the series 2-0. Which has allowed the Indian team to overtake the Lankan lions to 4th place in the World Test Championship 2021-2023.

The match began with India posting a fighting 252 runs on the board with Shreyas Iyer guiding the Indian inning and was at last dismissed for 92 runs, missing out on his Century.

In response to which, Sri Lanka had a disastrous run as they were completely dismissed for 109 runs with Jasprit Bumrah taking a 5 wicket-haul. Other than him, Ashwin, Shami and Axar Patel were successful in getting wickets.

In the 2nd inning, India once again struggled to fight in the turning conditions. But still, thanks to brilliant contributions from Rishabh Pant and Shreyas Iyer, India put 303 runs. Pant became the Indian to score fastest fifty in Test cricket, while Iyer once again showed his ability as he scored 67 runs.

Sri Lanka were somehow competitive in the match till they lost their 2nd wicket on 97 runs, then were suddenly down to 4 wickets for 105 runs. Sri Lankan captain Dimuth Karunaratne fought hard and scored century, but was not enough as Sri Lanka were all-out for 208 runs.

Following the win, India have overtook Sri Lanka in the World Test Championship 2021-2023 Points Table to slot into 4th position. With the 2-0 win, India now has win percentage of 58.33, while Sri Lanka is down to 50 percent. Australia, Pakistan and South Africa are placed ahead of India on the ladder board.