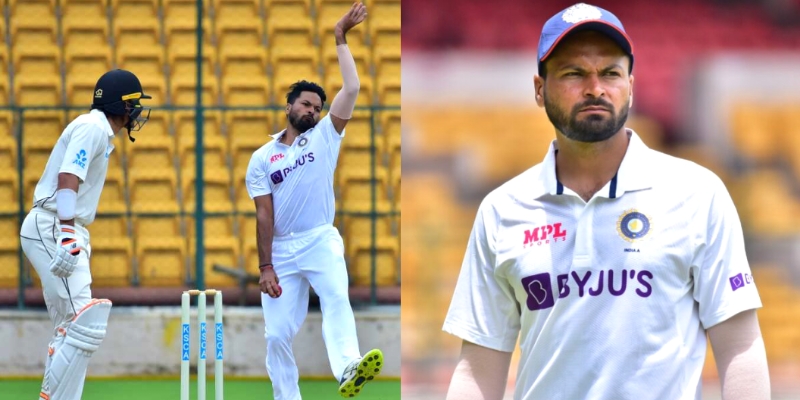 The Board of Control for Cricket in India (BCCI) has announced the Indian team squad for the three-match ODI series against South Africa to be played from October 6. Shikhar Dhawan has been named captain by the team while Shreyas Iyer will takeover as the vice-captain as because the main team players would have flown to Australia by then.

The most special thing about the squad announced is that Rajat Patidar and Mukesh Kumar have been included in India’s team for the first time. While many may be aware of who Rajat Patidar is, but, not many may know who Mukesh Kumar.

Who is Mukesh Kumar selected for the South Africa ODI series?

After the IPL started, it has almost become a tradition that the selectors mostly picks squad for the T20I and ODI mostly by judging players’ performance in the IPL. However, Mukesh Kumar is yet to play IPL and his inclusion means that he has truly earned that place.

Let us tell you that Mukesh Kumar’s father was a taxi driver in Kolkata. His father passed away when he was playing for Bengal in the Ranji Trophy 2020.

Mukesh Kumar has seen many ups and downs in his life. In the year 2008-09, in a cricket tournament held in his district, Mukesh displayed his brilliant bowling for the first time. He showed his talent for the first time by taking a total of 34 wickets including a hat-trick in seven matches of that tournament.

You all may not be aware that Mukesh represented Bihar in the Under19 Cricket Tournaments. After this, he turned to Bengal and never looked back from there. Mukesh came to the notice of the selectors by taking more than 30 wickets in two consecutive seasons of Ranji Trophy and after that he was selected in the India-A team.

He also did very well with the India A team against New Zealand A, and today, he has been included in the Indian team for the three-match ODI series against South Africa.

Mukesh Kumar has played 31 first-class matches in which he has taken 113 wickets at an average of 21.96, strike rate of 48 and economy rate of 2.74. He has also performed brilliantly for the Rest of India in the Irani Cup being played at the moment.

As for his performance in the white ball cricket, he has played a total of 35 matches, including both T20 and One Day cricket and has taken 36 wickets with a very good economy rate here as well, which proves he is quite an economical bowler.