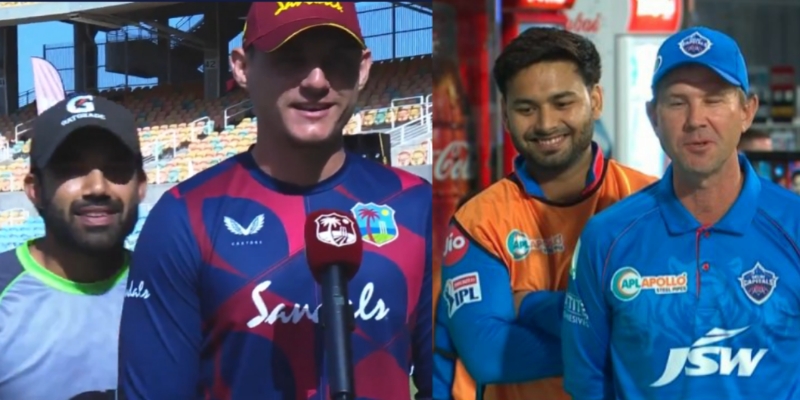 The Pakistan cricket team is currently playing a Test match against the West Indies cricket team. The Caribbean outfit won the first Test match. Meanwhile, Pakistan started the second Test on a positive note. They were down to 2/3, but at the moment, they are 217/4. Fawad Alam played a fantastic knock for his team. But an incident happened that reminded fans of Rishabh Pant.

Speaking of the match first, Alam had to retire hurt when he was on 76 runs off 149 balls. His captain Babar Azam supported him to perfection, scoring 75 runs from 174 deliveries. While Pakistan’s batsmen impressed fans with their batting performance, the weather has not allowed much action in the Test match of late.

At the moment, the second session of Day 3 of this Test match is underway. However, only 80 overs have been bowled. Still, West Indies’ player Joshua Da Silva said in an interview that the home team was not going for a draw. In the middle of the interview, Pakistan’s Mohammad Rizwan made his presence felt. He interrupted the interview without saying anything.

“Too funny! Rizwan sneaks up on fellow wicket-keeper Joshua Da Silva during his pre-match interview. “We’re not playing for a draw” – Da Silva,” West Indies Cricket posted the video on Twitter and captioned it as above.

Too funny! Rizwan sneaks up on fellow wicket-keeper Joshua Da Silva during his pre-match interview.

"We're not playing for a draw" – Da Silva

Rishabh Pant was the captain of the Delhi Capitals in the first phase of IPL 2021. However, in 2020, he was a player, and he missed a few games due to injury. One of the games was against the Chennai Super Kings.

In that game, DC’s coach Ricky Ponting spoke to the commentators during the match. Rishabh Pant caught everyone’s attention with his activity in the background. Hence, Rizwan’s incident today reminded fans of Pant.

Watch: Kieron Pollard Whirlwind Batting, When he smashes six sixes in an over Against Sri Lanka
WATCH: Cricket fan Jarvo shows up at Headingley; this time as Indian batsman
To Top