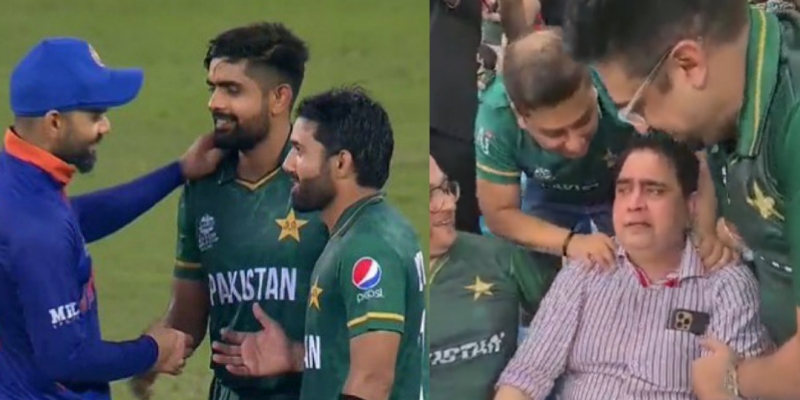 Pakistan defeated India by 10 wickets to start their T20 World Cup on a fantastic note. With this win, Pakistan broke the streak of not winning a game against India in the World Cups. Emotions, as expected, were high in the Pakistan camp. In this article, we take a look at Babar Azam‘s father’s emotional reaction after his son led Pakistan to a historic win against India.

Before the game, it was India that was all over the news. The team was termed as favourites against the unpredictable Pakistan squad. However, within just a few minutes after the game started, Pakistan stamped their authority over the game. Shaheen Afridi removed the openers early before the other bowlers squeezed runs out of the game and putting India under immense pressure.

With the bat, Pakistan was in top form. The Indian bowlers did not look threatening and Pakistan took a full toll out of it. Without losing a wicket, they chased the target and exerted their dominance.

Babar Azam was the focal point around whom Pakistan won the game. As the captain, his bowling changes were splendid as he never let India run with the game. With the bat, he scored 68 runs from 52 balls and ensured Pakistan did not suffer any hiccups. Babar Azam’s father was really happy with the win. He was seen to be emotional in the stands after the victory.

This is Babar Azam’s father. So happy for him. I first met him in 2012 at Adnan Akmal’s walima. Babar at that time was 3 years away from Pakistan debut. I clearly remember what his father told me “bas debut ho jane do. Agay sara maidaan babar ka hai” pic.twitter.com/ZlsvODQkSg

With this win, Pakistan has crossed a major hurdle. They now have a great chance of entering the knockout stages if they continue the same performances.