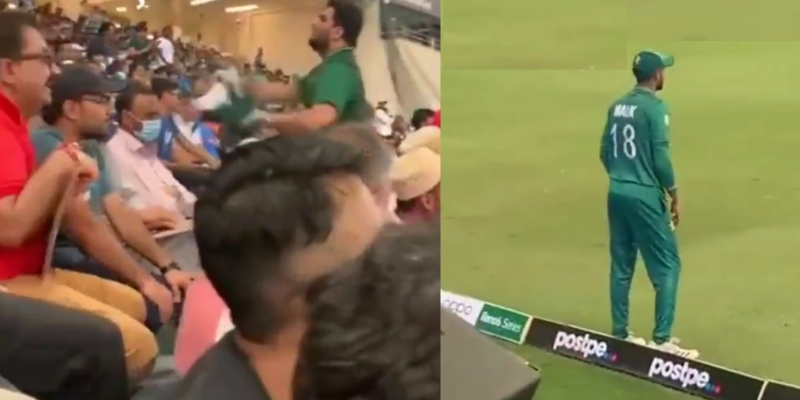 Pakistan defeated India by ten wickets at Dubai in the 2021 T20 World Cup. Like most of the time, the game was played amidst an immense competitive spirit. However, there were a few light moments on the field as well. In this article, we take a look at the clip in which Shoaib Malik responds to fans calling him ‘jeejaji’ while he was fielding.

Before the game started, it was India who was the favourites. The team was dominant in the warm-up fixtures and everyone expected the men in blue to defeat Pakistan easily. However, the Pakistan squad had other ideas.

With the ball, Shaheen Afridi took no time in making an impact. He removed the Indian openers quickly and put India on the back foot right at the start. From then, it was only catching up that India could do. Later, with the bat, Mohammad Rizwan and captain Babar Azam did not leave even an inch for India to get into the game. With absolutely no hiccups, they chased the target down.

Shoaib Malik is married to popular Indian tennis player Sania Mirza. Hence, Malik happens to be India’s son-in-law. While he was fielding, a few Indian supporters called him “jeejaji”. Malik responded to them. Here is a look at the video.

It was nice of Malik to acknowledge the attention being shown by the India supporters. The Indian contingent, too, showed class as they never crossed the line at the edge of the boundary. Everything was in the right spirit and it was a good moment on the field.