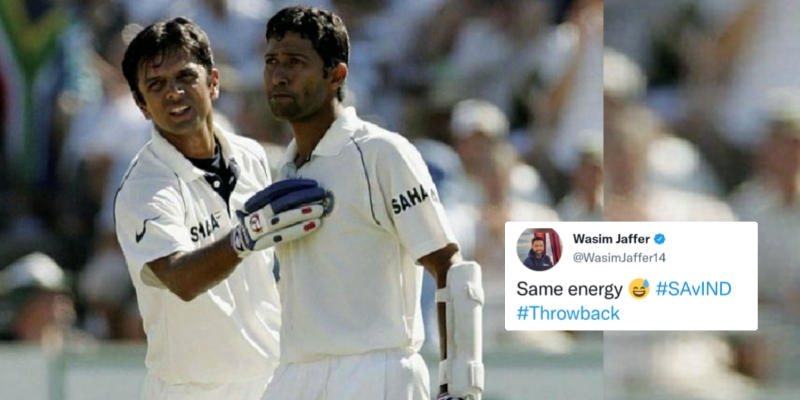 Wasim Jaffer is one of the most hilarious Twitter users when it comes to Cricket Twitter. Often, he posts funny memes that are related to the game. With just a few days to go for the South Africa series to start, the former Indian opener posted another meme. In this article, we take a look as Wasim Jaffer drops a hilarious meme in a throwback to his brilliant ton in South Africa.

Usually, Indian batsmen have found it hard to score in South Africa. The swinging conditions, green tracks and a strong South African pace attack have made the Indian batters vulnerable. However, back in 2007, Jaffer struck an incredible ton at the Newlands in Cape Town. Rahul Dravid, who is the current coach of Team India, was the captain of the team when Jaffer scored the century. Hence, taking this as a reference, Jaffer pulled out another meme template from the film Hera Pheri and posted it today.

India will target a series win in the Rainbow Nation

Meanwhile, Team India will begin the series on December 26th. Although India is missing a few key players, they will still look to win the series. South Africa is not exactly strong at the moment and they will also miss the services of Anrich Nortje. Hence, India has a chance to win the tournament.

The key will be the Indian batting line-up. With Rohit Sharma missing, the likes of Mayank Agarwal and KL Rahul must step up. The entire middle-order needs to do well as the batting depth may not be there due to the absence of Ravindra Jadeja. Bowling will be the strength with a good core led by Jasprit Bumrah. R Ashwin is likely to play all three games.

Watch: Tim David Runs A Short Run To Get Back On Strike In BBL Game
Watch: Sri Lanka’s U19 Player Matheesha Pathirana Reminds Of Lasith Malinga With His Bowling Action
To Top