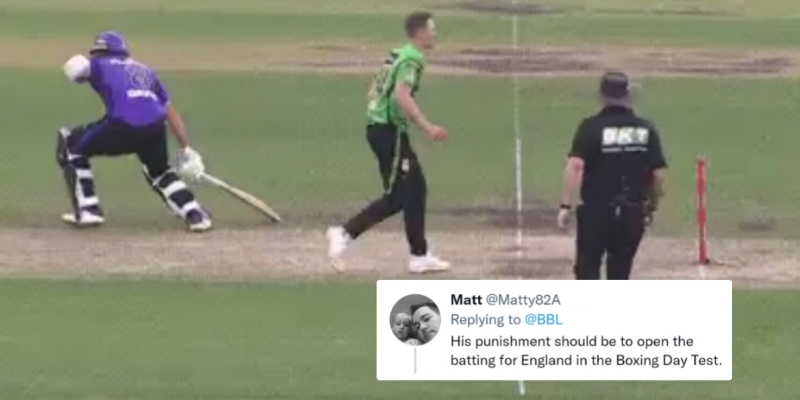 In the game between Hobart Hurricanes and Melbourne Stars on Friday, Tim David’s Hobart batted first. The batsman from Singapore had struck a few blows and was helping his side finish on a high. In the last over, Tim David wanted most of the strike since the batter at the other end was not known for his big hits. David himself had done well until then and hence, his confidence was running high.

In the penultimate delivery of Hobart’s innings, Tim David hit the ball towards the long-on. However, to ensure that he comes back to strike, he finished the first run well before the crease. The umpires noticed it and decided that David had acted in an unfair manner. Hence, they removed the two runs that David’s team took and also handed five penalty runs to the side. Eventually, it was Hobart Hurricanes that won the game. Here is a look at the incident below:

Stars will start their innings with 5 free runs courtesy of this… #BBL11 pic.twitter.com/lz9tRxNLLB

The batsman will be in demand at IPL 2022 Auctions

Tim David did not get too many chances in IPL 2021. However, he will be chased by multiple teams at IPL 2022 Auctions. A middle-order power-hitter is valuable and adding to this, David also provides a few overs of off-spin. This adds terrific balance to the XI. Hence, he could go for a big sum at the event.