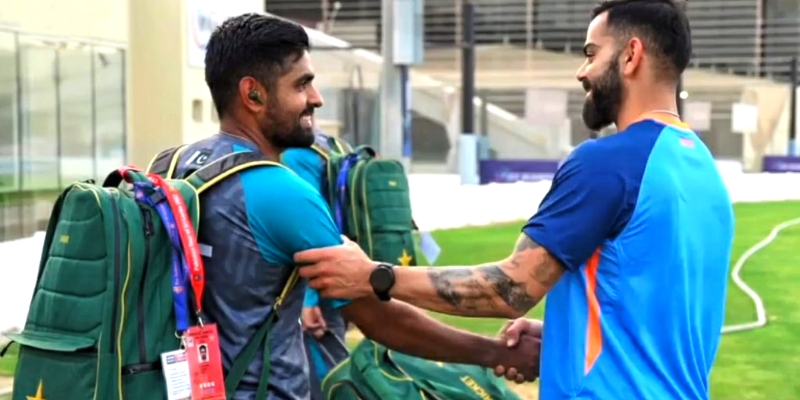 The Indian cricket team has reached Dubai for the Asia Cup 2022 and the team has also started practice for the Asia’s biggest cricket tournament. India has to play its first match against Pakistan in Dubai on August 28 and Pakistan is also present in Dubai and have started their practice session.

Meanwhile, before the big match, Virat Kohli and Babar Azam have been seen meeting each other during their practice session. Actually, the Board of Control for Cricket in India (BCCI) has posted a video, in which it can be seen that the Indian team has started its preparations. Meanwhile, Kohli is seen meeting Babar during the training session.

Both the players have met laughing before this high voltage match. Apart from this, Kohli is also seen asking Afghanistan’s Rashid Khan for his well being.

In the video posted by BCCI, Indian players are also seen meeting Afghanistan players. Apart from this, other players including Dinesh Karthik, Suryakumar Yadav and Yuzvendra Chahal have been seen hitting on the training ground.

Babar has played the only T20 International against India so far. During the T20 World Cup played last year, Babar scored 68* in 52 balls while chasing the target against the Indian team. Meanwhile, he also hit six fours and two sixes as part of his inning and guided his team to 10 wickets victory.

Kohli has played seven T20 Internationals against Pakistan so far, scoring 311 runs at an average of 77.75 and a strike rate of 118. Meanwhile, he has also scored three half-centuries in those games. Even though Kohli’s recent form has been disappointing, one can expect great innings from him this Asia Cup 2022.

“He’s Cristianal Messi of cricket” – Watch Shadab Khan’s great introduction of Babar Azam to Ajax players; video goes viral
“Not a fan of anyone but Virat” – Watch: Virat Kohli’s humble gesture to a Pakistani fan on demand of selfie
To Top