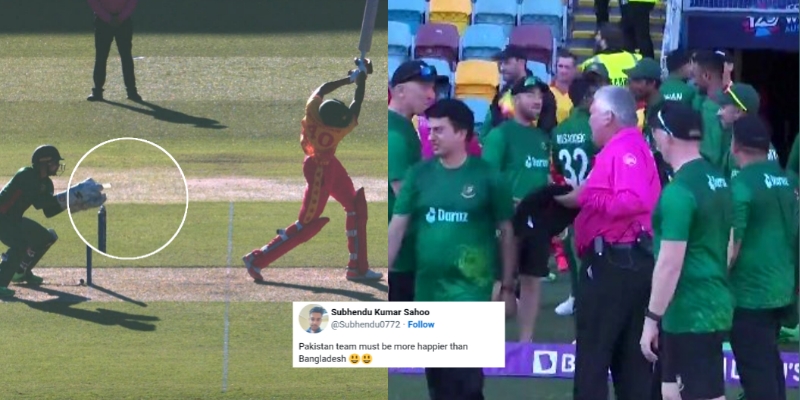 The first match of the day’s matches in T20 World Cup 2022 between Bangladesh and Zimbabwe ended in quite a bizzare fashion and caused a huge ripple after witnessing just what really happened in the match.

Batting first, Bangladesh out on a total 150 runs on the board despite a poor start. Zimbabwe also faced a poor start to their inning, but thanks to brilliant efforts from Sean Williams and Ryan Burl that Zimbabwe came really close to winning it.

However, Bangladesh got the better of them in the end. But what really happened in the last ball of the match was kind of bizzare. Zimbabwe needed 5 runs of 1 balls to win and then a brilliant ball from Mosaddek Hossain meant that 0 runs were scored and Bangladesh won the match.

However, after reviewing the footage, the third umpire found out that Bangladesh wicketkeeper Nurul Hasan had collected the ball even before it passed the stumps. As such, it was called a no ball and a free hit and both the teams were called back from dugout to replay the last ball of the match.

However, this time too Zimbabwe batter couldn’t connect the ball and this time Nurul did collect it behind the stumps to win the match by 3 runs.

You just cannot write a better script for a T20 game.

Bangladesh won, player went back to dressing room then it turned as no-ball and umpires called back the players then again Bangladesh won. pic.twitter.com/RpfsAXdyUe

One of the craziest scenes on a cricket field:

Both the teams shook the hands, were going off and then the 3rd umpire signals it's a No Ball because wicketkeeper's gloves weren't behind the stumps.

Pakistan team must be more happier than Bangladesh 😃😃

Brooo Zimbabwe should have won for a lifelong meme on this game.

“Time to open with Chahal and Shami, Kohli and Rohit should bowl in powerplay” – Twitterati mocks Pakistan fans as they are dependent on India winning against South Africa to make it to semi-finals
To Top