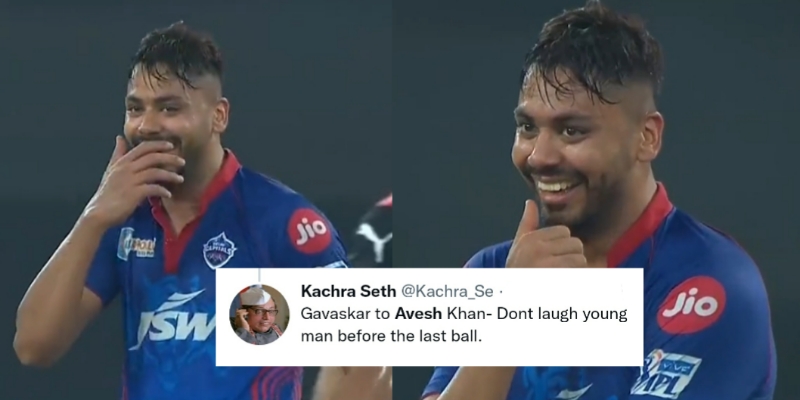 Royal Challengers Bangalore and Delhi Capitals were involved in a close game on the final day of the league stage of IPL 2021. In the end, it was RCB who won the game. Virat Kohli‘s men won the encounter by seven wickets. In this article, we take a look at the Twitter reactions to Delhi Capitals bowler Avesh Khan smiling at KS Bharat in the final over.

RCB and DC involved in a close game

Put in to bat first, Delhi Capitals were off to a good start. Prithvi Shaw and Shikhar Dhawan, who had been struggling in the UAE leg, got their mojo back and went after most of the RCB bowlers. However, the RCB bowlers pulled things back and although Shimron Hetmyer played a cameo at the end, DC was able to put just 164 runs on the board.

In the chase, RCB was off to a bad start as they lost openers Virat Kohli and Devdutt Padikkal very early. AB de Villiers was promoted and after he steadied the ship, he got out as well. It was the partnership between Glenn Maxwell and KS Bharat that eventually won the game for the side.

After conceding just four runs off the last over, Delhi Capitals had the game in its hand. Avesh Khan further strengthened the hold by bowling a few good balls in the final over. However, in the penultimate ball, KS Bharat missed connecting the ball and Avesh mockingly smiled at the batsman. Sunil Gavaskar, on the com-box, said that it was unnecessary. The legend said that what matters is who has the last laugh. The next two balls, Avesh Khan struggled and Bharat hit a six off the last delivery to steal a win for his side. Below, we take a look at the Twitter reactions to the smiling act by Avesh.

The smile was an admission that he got away with a bad ball. In the slot with the mid-off inside the circle. He wasn’t mocking Bharat. Kuch bhi kehte ho bhai. https://t.co/ixoBGno9if

LOL. Avesh was sheepish after getting away with that ball. By no means he was trying to put down Bharat. Try to understand the situation before spreading hate. https://t.co/T8fn19V3LS

Avesh Khan was laughing at himself for the ball he bowled. Third man was up and he bowled just in that area. Any edge would have been four. Don't drag him unnecessarily. #RCBvDC

Avesh Khan smiling after bowling 2 Yorkers in last over…

Commentary: Keep calm young man… It’s not over yet

Avesh Khan was laughing when Bharath missed the 3rd ball in the over. It’s never over until it’s over mate. What a strike from Bharath. #RCBvsDC #IPL2O21 pic.twitter.com/UwHhEtgzAu

Loved Sunny G’s commentary in the last over, calling out Avesh Khan’s laugh and eventually the game. Important momentum breaker for DC before they play #CSK on Sunday.

Avesh Khan did a Mushi kinda stuff today and inturn it was Bharath who has the last laugh 🔥❤️😍#RCB #RCBvDC #Bharath pic.twitter.com/D7XAxxZKUi