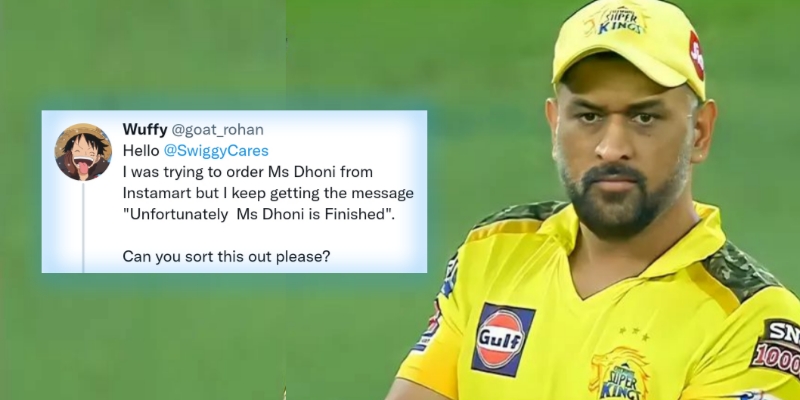 Nowadays, brands employ witty admins who try to improve the product’s reach as much as possible with their posts. Sometimes, they also win the hearts of a few users with a few well-written replies. Swiggy is the latest brand that did it with one of its recent replies on Twitter. In this article, we take a look at the recent incident in which Swiggy gives an epic reply to a user who tried to troll MS Dhoni.

MS Dhoni’s form has been underwhelming this season. The former India skipper is struggling to score runs and when he is scoring them, the strike rate is too low and this is hampering the prospects of the team. Hence, MS Dhoni is being subjected to heavy trolling and criticism. However, at times, this has crossed the line.

The fact that MS Dhoni is 40-years-old is not being considered by many. MS Dhoni is still fit and is doing an exceptional job with the gloves and as the captain. He has already led his team to the playoffs in IPL 2021. Despite this, he is being trolled constantly.

Swiggy gives an epic reply to a Twitter user

One of the users tried to take a jibe and wrote, “Hello @SwiggyCares, I was trying to order Ms Dhoni from Instamart but I keep getting the message “Unfortunately Ms Dhoni is Finished”. Can you sort this out please?”

However, Swiggy came back with a witty one-liner, “Unfortunately they don’t make Legends like MSD anymore.” This way, the popular online food ordering platform roasted the user.

Meanwhile, despite the three consecutive losses, CSK is still one of the franchises that are likely to lift the trophy. The team has done it before and there is plenty of experience, which could come in handy. Although not official, CSK will stay at No.2 and hence, will have an additional chance if they fail in Qualifier 1.