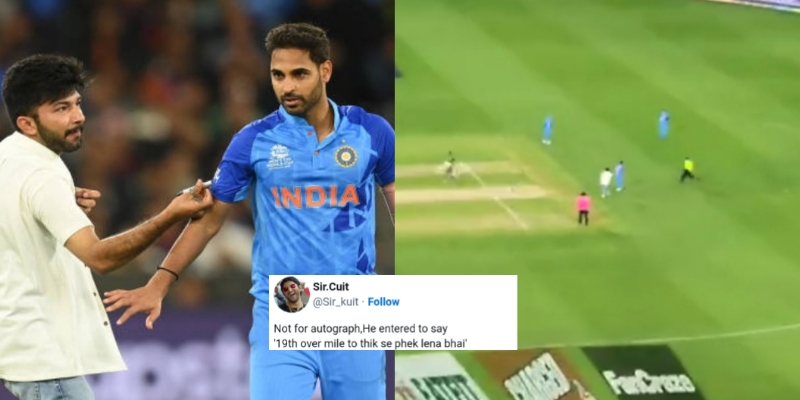 It has been nearly 24 hours since India’s historic win over Pakistan in the T20 World Cup 2022 match played at the Melbourne Cricket Ground (MCG) on the 23rd of October.

While there were a lot of drama in the match, there was one drama that went unnoticed from everyone’s eye sight.

During Indian team’s bowling, there was a certain team India fan, or rather I say Bhuvneshwar Kumar fan who invaded the pitch to get an autograph of the Indian star swing bowler.

However, he was straightaway escorted from the pitch by the ground security and didn’t got the autograph.

Seeing this, many can’t believe that he opted to get an autograph from Bhuvneshwar instead of some other stars of the game present on the pitch. However some also appreciated the fact that Bhuvneshwar Kumar deserve that, while some commented some humourous remarks.

A fan invaded the field to get Bhuvneshwar Kumar's autograph in yesterday's match. pic.twitter.com/Cpk8VuCpWP

Here is the video of him … pic.twitter.com/5RzlgCxhBN

Not for autograph,He entered to say
'19th over mile to thik se phek lena bhai'