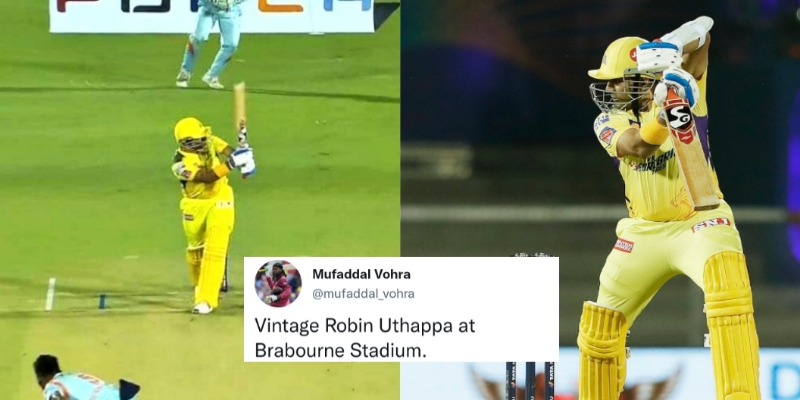 Match number 7 of the Indian Premier League (IPL) 2022 season is currently being played between the Chennai Super Kings and Lucknow Super Giants and it has all been Robin Uthappa so far today.

Both the Chennai Super Kings (CSK) and Lucknow Super Giants (LSG) had to endure a defeat in their opening match of the IPL 2022 against Kolkata Knight Riders (KKR) and Gujarat Titans (GT) respectively.

Both the teams are looking to get back on track and register their first win of the season. And CSK’s Robin Uthappa in ensuring that for the yellow army.

The Karnataka born batsman played absolutely tremendous inning while opening for CSK. Even though they lost the wicket of Ruturaj Gaikwad early on, Robin Uthappa kept his foot on paddle.

He scored a quickfire 50 runs of 27 balls before was dismissed by Ravi Bishnoi. His inning included 8 fours and 1 six. Fans of the Chennai based franchise were absolutely buzzing with the 36-years-old’s batting performance.

the man, the myth, the legend – Robin Uthappa

Can’t believe that none of the 9 teams went after ‘Robin Uthappa’ in the auction just because He is 36 right now while CSK got him at the base price.

He is a different batter altogether while opening the batting. The way He utilizes the powerplay is so amazing to watch.