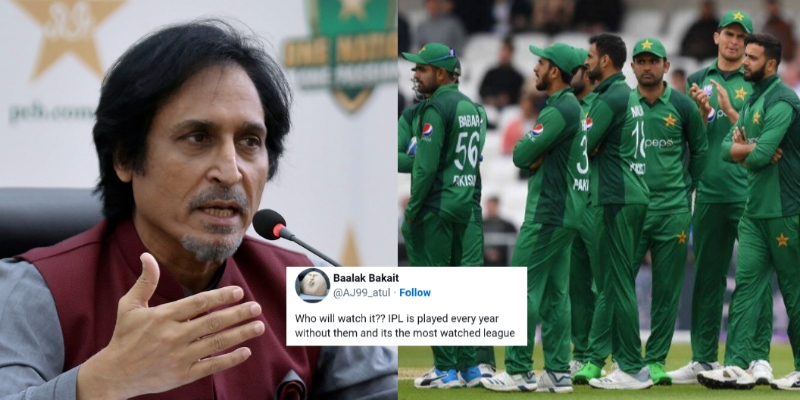 Pakistan Cricket Board (PCB) chairman Ramiz Raja has once again come out saying that the if the Indian cricket team does not travel to Pakistan to play in the Asia Cup 2023, Pakistan will also skip the Cricket World Cup 2023 to be played India.

He has once again has given a statement that he is staying put to his decision and that Pakistan won’t travel to India for the ICC Cricket World Cup 2023 if India doesn’t play the Asia Cup 2023 in Pakistan. He also added that if Pakistan doesn’t play in the World Cup 2023, then no one will watch it.

Meanwhile Twitterati has reacted to Ramiz Raja once again coming out to repeat his earlier statement.

Ramiz Raja said, "if Pakistan doesn't participate in next year's World Cup in India, then who'll watch it? We won't travel to India if they don't travel to Pakistan for Asia Cup".

IPL without pak player. So Ramiz must Focus on rising fund for their team instead of worrying about viewership. pic.twitter.com/Kiy83w7w4P

If Pakistan boycotts wc 23 it's their loss.

Even our Kohli is earning morethan pcb combined.

Who will watch it?? IPL is played every year without them and its the most watched league

🤣 lol india is playing the wc that is enough to get massive amount of views he shouldn't worry about it. https://t.co/LSS5Iqd73H

Except Rameez Raza all will watch, including people from his own country. https://t.co/l19O5Zr9N9