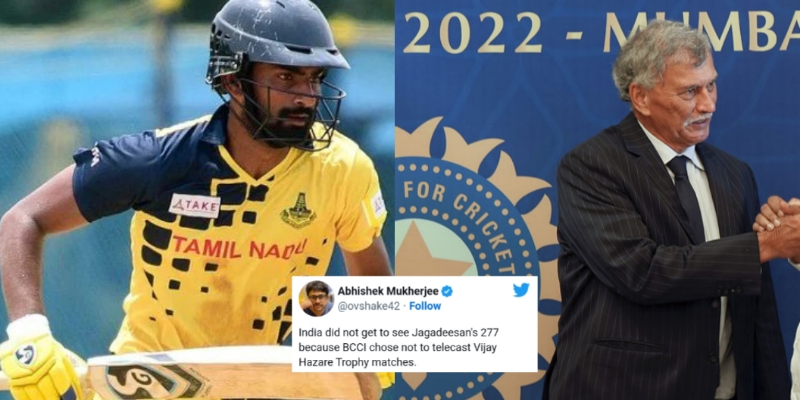 Tamil Nadu’s opening duo stole the show today in the Vijay Hazare Trophy as the duo of Narayan Jagadeesan and Sai Sudarsan put on a strong opening wicket partnership of 416 runs with the former scoring a double century.

Narayan Jagadeesan has been making the headlines today for his record breaking inning that saw him become the world’s highest individual run scorer in the 50 overs format, international and domestic.

However, the fans have showcased their anger in various social media platforms and criticised BCCI for not being able to televise the match. Fans in social media were eager to watch Jagadeesan’s batting but since there was no broadcast, people have been criticising the BCCI, who is the richest cricket board in the world.

🚨RECORD‼️
TAMIL NADU becomes the first team to score 500 in a 50 over format game! #crickettwitter unfournatley we’re not witnessing it on live #TamilNadu #VijayHazareTrophy2022 #jagadeesan

Watched some English County games live on YouTube when some of our players were there earlier in the year. County boards have their own channels.

A legendary 175* of Kapil sir wasn’t telecasted and of cours there are no clips as well. That was one true record breaking knock in the int’l setup.

Today, Jagadeesan has lit up #VijayHazareTrophy2022 by breaking records and we could not witness it live.#NJagadeesan#Cricket

@BCCI Richest board with the worst team!

India did not get to see Jagadeesan’s 277 because BCCI chose not to telecast Vijay Hazare Trophy matches.

“SRH should get him, atleast he is better than Kane Williamson” – Twitter reacts as reports suggests that Joe Root may enroll for IPL 2023 Player Auction