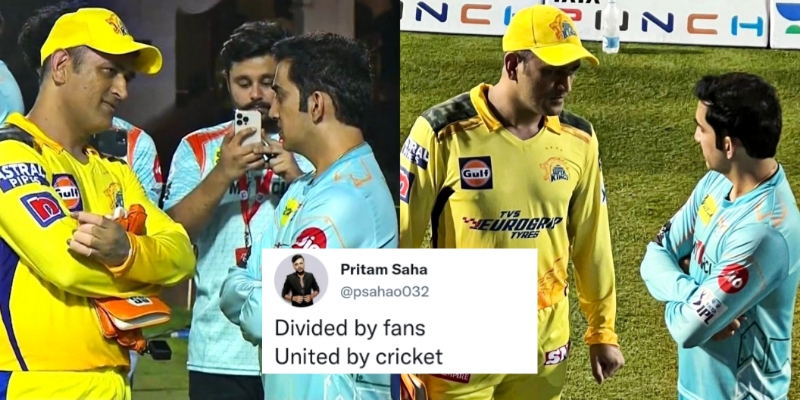 Lucknow Super Giants stunned the Chennai Super Kings in a high scoring match as KL Rahul’s side chased down a target of 211 runs to record their first ever victory in the Indian Premier League (IPL).

It was a high scoring match as CSK put on a total of 210 runs on the board, thanks to contribution from everyone, while MS Dhoni gave it the finish. However, due factor played a big role and Lucknow managed to chase it down.

After the match, India’s 2011 World Cup final heroes MS Dhoni and Gautam Gambhir were captured chatting with each other. There has been discussion of rift between the duo, but the picture proves the real relationship between the duo.

After the videos and pictures surfaced of the duo talking with each other, social media was buzzing, while many cherished the moment, many even blamed the fans for thinking of even any kind of rift between them. Here’s how Twitter reacted.

Best Moment of the Day 💙💛
This scene made my day. Now I am going my bedroom for Sleep 😴

They’ve never really had an issue. They only thought differently about the game. And in being critical of Dhoni, Gambhir was only doing his job as a broadcaster or expert. MS would have respect for that. https://t.co/9PbSwjGpv1

This is for those who said Gautam Gambhir and Ms dhoni don’t have good relationship.
🖕🖕🖕#CSK #CSKvsLSG #jadeja #ChennaiSuperKings pic.twitter.com/VylIA9Kd2O

“Remember the name”, Twitter reacts as Evin Lewis helps LSG to win its first IPL game
“If that wasn’t a match winning innings, I haven’t seen one in my life” – Twitter reacts to Shahid Afridi’s comment on Babar Azam’s performance
To Top