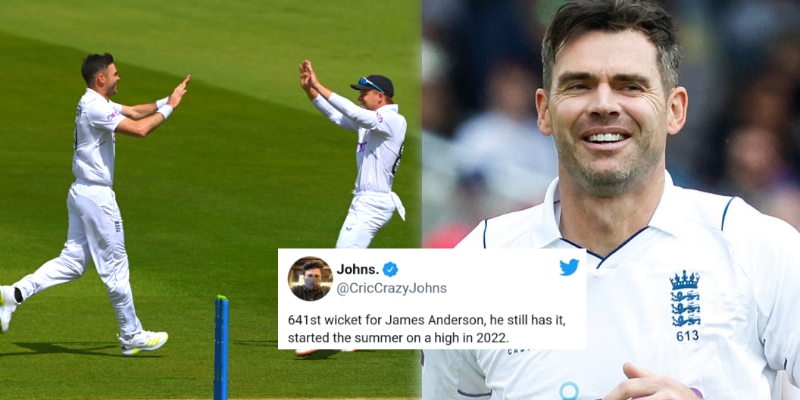 First of the scheduled 3 match Test series between England cricket team and the New Zealand cricket team has began in London’s iconic Lord’s ground. And is far, it has been English bowlers’ show.

The New Zealand cricket team, led by Kane Williamson, has landed in the United Kingdom as the reigning World Test Championship winners faces off against home team England.

It is quite an important series for the England team, sitting currently at the bottom of the World Test Championship 2022-2023 Points Table. The team is now under the new hands of Ben Stokes and the Brendon McCullum.

It was Kane Williamson who won the toss and opted to bat. However, their decision has badly been proven wrong. As of writing this article, New Zealand are down to 5 wickets for 36 runs in 20 overs.

And it all began with the 39-years-old James Anderson, who got the wicket of Will Young, and then soon after Tom Latham as well.

After a spectacular start for the English team, the Twitterati praised James Anderson, who is bowling like a prime 28-years-old and seems like is getting younger day by day.

641st wicket for James Anderson, he still has it, started the summer on a high in 2022.

James Anderson got better by age, especially after 35, very very rare in any format of the game by a pace bowler.

This new young bowler England have plucked out of county cricket, James Anderson, is very good!

Things that get better with age:
🔸 Fine wine 🍷
🔸 James Anderson 🔥

Out of the 6 overs, 5 overs are Maidens and took 2 wickets.