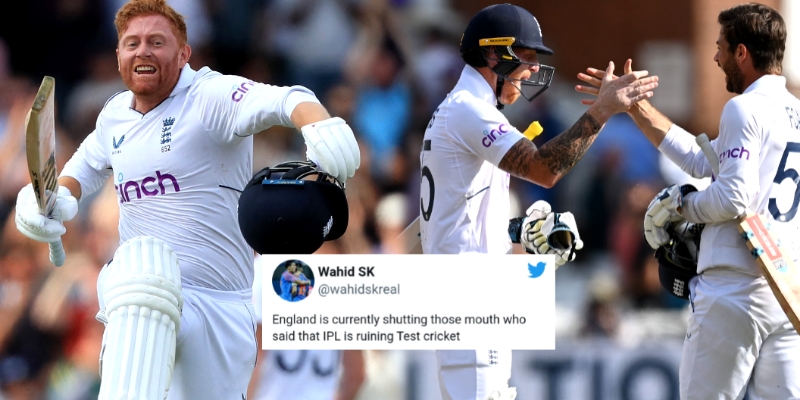 Chasing a target of 299 runs in the 2nd Test with just 2 sessions of play left, it was bound towards either a draw or a win for New Zealand if they could bowl well.

And that what New Zealand did, or rather I say, England lost their first 4 wickets for 93 runs while trying to play hard-hitting cricket in chase of the target.

While it was all looking like a match set for New Zealand, but then, something happened that you don’t often see in Test cricket. England’s Jonny Bairstow displayed his clean hitting, scoring a century from 77 balls. He further added 36 runs before was dismissed for 136 runs from 92 balls.

Bairstow was well supported by the England team captain Ben Stokes, who also displayed his T20 cricket, scoring 75 runs from 70 balls, and hitting the winning boundary.

When at one time the match was looking well set for a win, England won the match with still more than 20 overs still left to be played. Twitterati went berserk as England pulled off the biggest heist.

England have pulled off a heist of the year. @Puneite_ #ENGvNZ

Jonny Bairstow has hammered 136 from 92 balls at SR of 147. Clear signs of IPL enriching English cricket 👏

Man made for Big moments – Ben Stokes. After that disappointing 2016 WC final then it has been Stokes in pressure situations: WC final in 2019, Headingley 2019 and now Trent Bridge 2022. pic.twitter.com/4PZjyfxwJj

“Some genius thought 5 match enough to judge a player” – Twitter reacts to Ruturaj Gaikwad’s comeback in form
“Can Wait for a top order of Rohit, Rizwan, Babar, Kohli” – Twitterati reacts as Afro-Asia Cup is expected to return in 2023
To Top