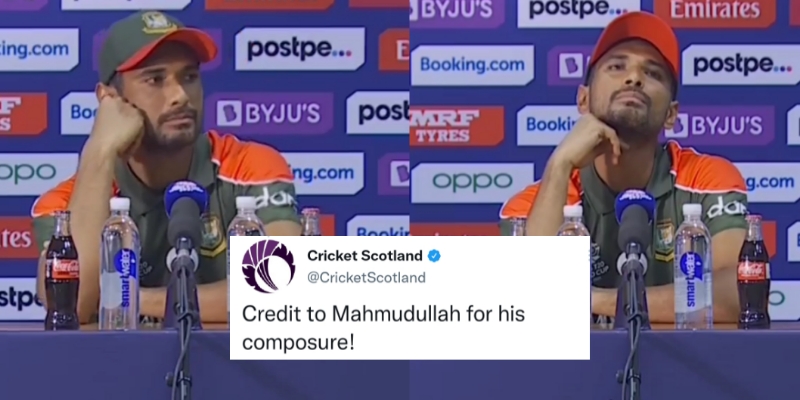 The T20 World Cup 2021 has got underway well and good. The first day itself witnessed a surprising result as the Kyle Coetzer led Scotland team handed a defeat to Bangladesh in the 2nd match of the tournament itself.

Bangladesh captain Mahmudullah was present in the press conference after the match. But as just he was about start speaking in his native language Bengali, a roar of Scotland crowds from the stadium interrupted him, who were singing Scotland’s national anthem in joy of winning the match. Mahmudullah resumed after the roar stopped. A video of the same incident was shared by the ICC and the Scotland cricket team social media handle.

Sorry we will keep it down next time 😬🏴󠁧󠁢󠁳󠁣󠁴󠁿 pic.twitter.com/WRPQF9fK7W

Talking about the match, Scotland defeated the Bangladesh cricket team by 6 runs as the Bangladesh team failed to accelerate towards the end of their inning.

The big credit for the win goes to all-rounder Chris Greaves. The Scottish all-round player first contribute with the bat by scoring a well made 45 runs of 28 balls and then went on to pick 2 wickets by giving away just 19 runs.

Winning the toss, Bangladesh decided to bowl first. The Bangla Tigers managed to restrict the Scottish side to 140. However, it has to be termed as a good comeback by the Scotland side, who had lost 6 wickets for just 53 runs. Mehedi Hasan picked 3 while Shakib and Mustafizur managed 2 wickets each.

In chase of the target, Bangladesh had lost the wicket of both the openers early, inside 20 runs. Then the two most experienced players for Bangladesh, Shakib Al Hasan and Mushfiqur Rahim took control of the inning, who both added 20 and 38 respectively.