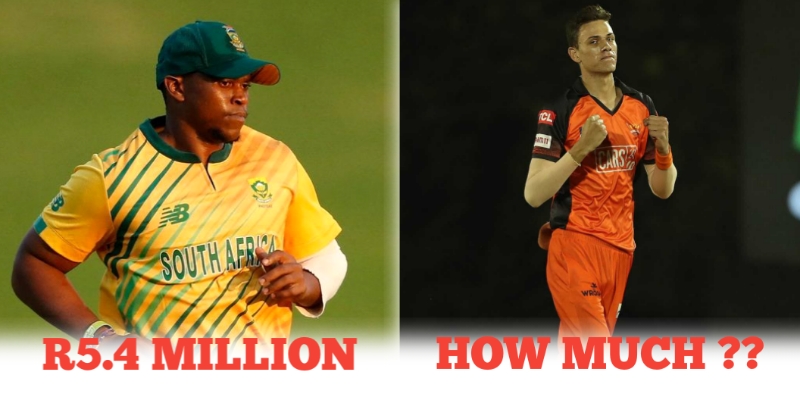 A mega player auction was held in Cape Town on Monday, September 19, for the SA20 League, starting next year in South Africa. Bidding was done on 314 players here. During this, all the 6 teams of this league added a total of 80 players with them. However, before the auction, all thr 6 teams had already included 22 players in their team.

Each team was to consist of 17 players. The names of these 6 teams are Durban Super Giants, Joburg Super Kings, MI Capetown, Paarl Royals, Pretoria Capitals and Sunrisers Eastern Cape.

On September 19, bids were made on all the players. Some of these players were included by the franchise owners in their respective teams, while there were some unlucky cricketers who went unsold in this auction.

In this article today, we take a look at the 5 most expensive buys in the SA20 Player Auction. Note that all the values are in Indian currency. As per current convertion rate, 1 South African Rand is equal to 4.5 rupees.

Not many people are well aware of Sisanda Magala but the excellent bowler has bowled well in South African domestic cricket. Magala is the deadliest bowler for the death overs and he could be crucial in that phase of the game.

Magala is also quite good with the bat. He has the ability to score important runs for the team in the death overs. Magala has also played for South Africa. He has taken 3 and 2 wickets in 4 T20I and 3 ODI matches respectively. Sunrisers Eastern Cape included him on their team for 5.4 Million Rand, which is almost 2 crore and 43 lakh INR.

Wayne Parnell is one of the most experienced bowlers in South Africa. He has led South Africa to victory in many matches with his excellent bowling. Pretoria Capital has included him in their team for 5.6 Million Rand, which is approx Rs 2 crore 52 lakh INR.

Marco Jansen bowled brilliantly in the recently concluded three-match Test series against England. The 22-year-old has been bought by Sunrisers Eastern Cape for 6.1 Million Rand, which is almost Rs 2 crore 73 lakh INR. He has played only one T20I match for South Africa so far in which he has taken 1 wicket at an average of 38 and an economy rate of 9.5. He has also played in the IPL for Mumbai Indians and Sunrisers Hyderabad and has taken 9 wickets in 10 matches.

After a long gap of 6 years, Rilee Rossouw made a tremendous comeback to the national team. He played a brilliant innings of 96 runs not out in the second T20I match against England this year.

Rossouw is one of the experienced batsmen in South Africa. He can turn the tide at any time with his batting. Rossouw was included to its team by the Pretoria Capital for 6.9 Million Rand that is approx 3 crore 9 lakh INR.

Tristan Stubbs is the most expensive player of the first season of SA20. The young South African batsman has been very good this year with his performance. Stubbs won the hearts of everyone by performing well for Mumbai Indians first in IPL and then Manchester Originals in The Hundred.