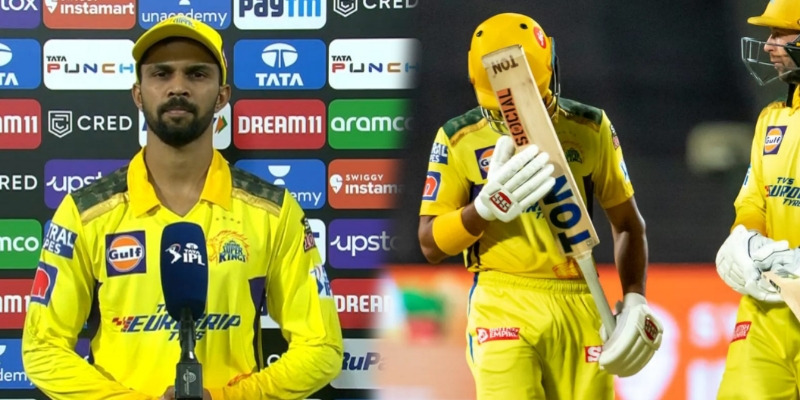 Chennai Super Kings (CSK) defeated Sunrisers Hyderabad (SRH) by 13 runs in the 46th match of the Indian Premier League (IPL) 2022 season played at Maharashtra Cricket Association Ground in Pune on May the 1st. CSK batsman Ruturaj Gaikwad, who was the hero of the victory, won the match easily for Chennai, thanks to his excellent innings.

The opening pair of the Chennai based side put the Hyderabad bowlers on the backfoot early on in the match. Ruturaj Gaikwad and Devon Conway shared a record 182-run partnership for the first wicket.

Ruturaj played a brilliant innings of 99 runs but he missed his century by 1 run. Ruturaj scored 99 runs in 57 balls with the help of 6 fours and 6 sixes and was finally dismissed by T Natarajan.

Gaikwad was sorry for not completing his Hundred but winning the match was a bigger thing for him than that. Gaikwad said that he felt very bad to have not converted the century, but is happy with the team’s win.

After the match, Ruturaj Gaikwad said in an interview with fast bowler Mukesh Chaudhary that he felt bad after missing his century but is happy that he took the pressure off of Devon Conway and also praised him. He signed off saying that it doesn’t matter whether it is 99 or 100, but win is the more important, “Whether it’s 99 or 100, winning the game is important,” said Gaikwad.

Devon Conway along with Ruturaj Gaikwad also completed his maiden IPL fifty. At the end, CSK won the match by 13 runs. This is the team’s 3rd win in the IPL 2022 and they currently sits 9th in the points table.