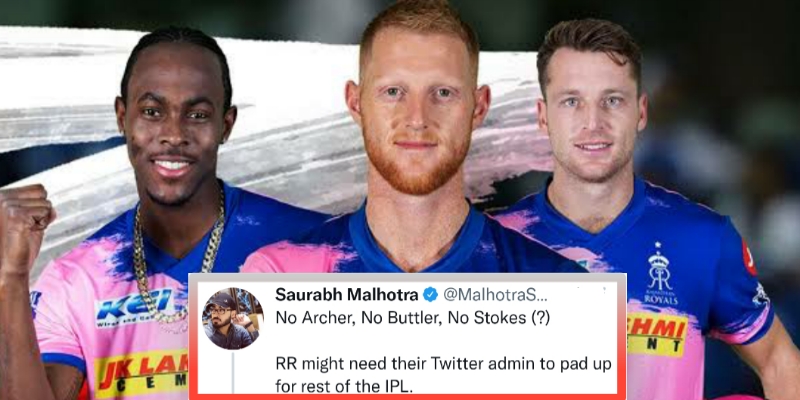 The Rajasthan Royals did not have a memorable first phase of IPL 2021 in India. The Jaipur-based franchise played seven matches, registering three wins and four losses. They ended Phase 1 of IPL 2021 on a winning note thanks to Jos Buttler’s century.

Jos Buttler and Ben Stokes have been two main players of the RR batting lineup. They have been the backbone of the batting department in the last few seasons. Buttler initially played for the Mumbai Indians in the Indian Premier League. Meanwhile, Stokes started his journey with Rising Pune Supergiant in 2017.

Unfortunately, both English players are unlikely to play in IPL 2021. Even Jofra Archer will miss the season. Hence, a cricket fan asked Twitter admin of Rajasthan Royals to pad up and bat for the team in the absence of Jos Buttler and Ben Stokes. However, he received an unexpected reply from the admin. Here’s what the fan asked:

“No Archer, No Buttler, No Stokes (?) RR might need their Twitter admin to pad up for rest of the IPL.” Rajasthan Royals preferred to use the new poster of IPL 2021 to reply to that fan.

In the first phase of IPL 2021, reports emerged claiming Rassier van der Dussen will join the Rajasthan Royals squad. However, the news is no official yet. While RR are yet to officially sign replacements for Ben Stokes and Jofra Archer, they have signed New Zealand’s wicket-keeper batsman Glen Phillips as a replacement for Jos Buttler.

Phillips can make his IPL debut later this year in the United Arab Emirates. Another franchise that has signed replacements is Royal Challengers Bangalore. The Bangalore-based franchise have signed Wanindu Hasaranga, Tim David and Dushmantha Chameera as replacements. It will be interesting to see how the new players perform.