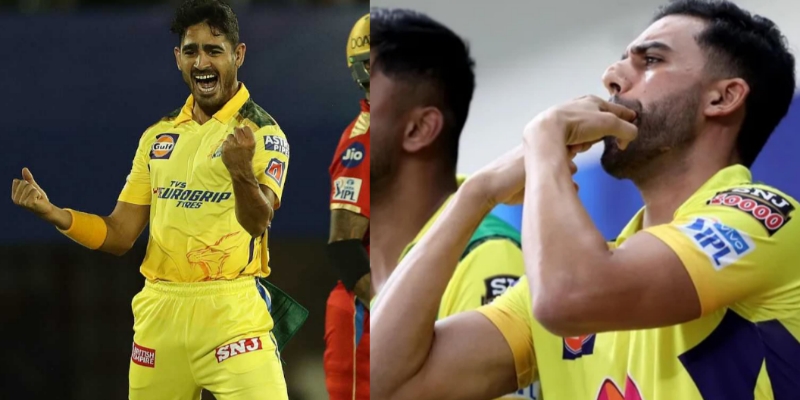 The 4-times champions Chennai Super Kings (CSK) have not had a great run in the Indian Premier League (IPL) 2022 yet due to many factors. One being the unavailability of their star pace bowler Deepak Chahar.

Deepak Chahar, who has been the frontline for Chennai Super Kings in the last couple of years, have been ruled out of the Indian Premier League (IPL) 2022 due to injury. The bowler is ensuring that he is still helping his team.

In a latest interview with the Times of India, Chennai Super Kings’ new left-arm pacer Mukesh Choudhary revealed how Deepak Chahar is helping him to the best of his ability.

Chennai Super Kings (CSK) have had a bad start to their IPL 2022 campaign, where their batting and bowling department have not performed well. But, since they have picked up form, Mukesh Choudhary has been leading the bowling artillery.

The 25-years-old left-arm pacer from Rajasthan has picked up 11 wickets from 8 matches in the IPL 2022 so far, and is the team’s 2nd highest wicket-taker, behind the experienced Dwayne Bravo.

Recently, Mukesh Choudhary sat in for a candid chat with the Times of India. Duirng that conversation, he revealed how Deepak Chahar is helping him to get better.

He said that he is in touch with Deepak and that he has told him to analyse the situation first and then bowl according to situation. He added that, initially he didn’t had a great start to the IPL 2022, but then Deepak called him and gave him some valuable tips.

Chennai Super Kings currently sits 9th in the points table, just ahead of Mumbai Indians. They have found their form with a victory in the last match against Sunrisers Hyderabad. They next take on the Royal Challengers Bangalore (RCB) tonight, on the 4th of May.