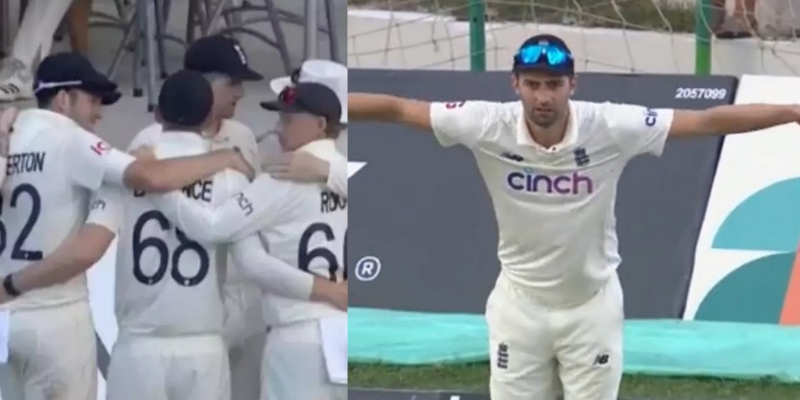 The first Test match of the three-match Test series between West Indies and England is currently being played at the Sir Vivian Richards Stadium in Antigua.

By the end of the second day’s play of the match, the West Indies cricket team have put on 202 runs on the scoreboard for the loss of four wickets, still trailing England by 109 runs. But most recently, a video from the match has gone viral on the internet when England pacer Mark Wood had to form his own team huddle, consisting of only him.

On the second day of the match, the England team resume the play from their overnight score during their first inning, after which the Joe Root led side put on 311 runs on the board, thanks to a brilliant innung of 140 runs from Jonny Bairstow.

But after this, when the West Indies team came out to bat for their inning, English fast bowler Mark Wood had to form his own team huddle, that only consisted of him. He imagined that he has teammates around him and imagined putting arm on their soldier.

The whole story is, during the West Indies team’s inning, the visiting team was seen discussing their strategies gathering together by forming a team huddle after the game resumed after a small rain interruption. But while the England team was gathering for the team huddle, the team’s fast bowler Mark Wood was fielding towards the other corner of the field (towards the fine-leg boundary) far away from the England team’s huddle.

Seeing it’s really far away to join the team for the huddle, he was worried at first and then decided to do own team huddle, imagining that he has his teammates around him, putting his arm on their soldier. Witnessing the scene, the commentators laughed out loud.

Joe Root wanted a team huddle, but there was one player missing…