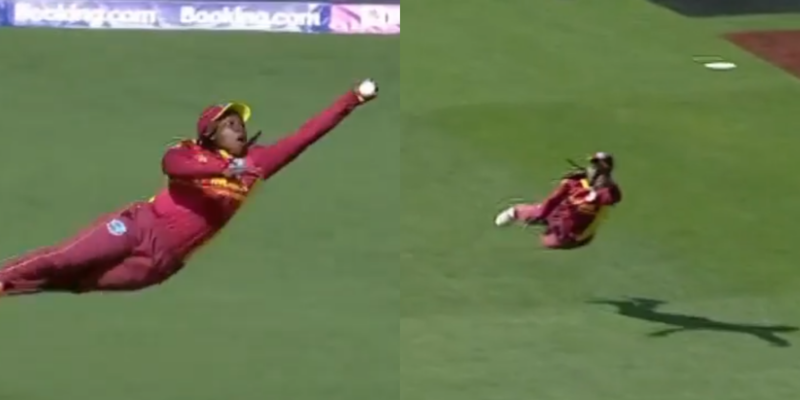 For both fans and cricketers, an ICC event is the best time. And that’s exactly what’s going on in New Zealand right now. The ICC Women’s World Cup matches are underway, and spectators are witnessing some spectacular performances. And that’s exactly what happened in a match between the England’s women and the West Indies women. You may have seen some great catches in your time as a fan, but the catch we’re talking about is one of the best in the game’s history. And in this article, we will discuss an incredible take by West Indian, Deandra Dottin.

The defending champions, England, locked horns with the mighty West Indies in the 7th match of the World Cup. West Indies skipper Stafanie Taylor won the toss and elected to bat first. But it didn’t go as per plan for them. Early in the innings, the West Indies women lost their four wickets and were reduced to 98/4 at one stage.

But then came the match-winning partnership between S Campbelle and Chedean Nation (49) for the fifth wicket. Both batters added vital 123 runs for help their team post a fighting total of 225/6 in 50 overs. Campbelle completed her half-century, she scored 66 runs and was the highest scorer in the first innings.

But it didn’t look like it would be enough to restrict England’s women in the second innings. And it would require something special in bowling or fielding from the West Indies to lift them up. And it came in as a one-handed stunner by Dottin, flying at the point to dismiss English opening batsman Lauren Winfield-Hill.

Her incredible effort lifted the spirits of the West Indies, and they did not allow England’s women to re-enter the game from that position.

Watching this on repeat! What a gun catch by Deandra Dottin 🤩🤯 #CWC22 pic.twitter.com/6TbydMsTba

And it was the West Indies bowlers who came out on top at the end. England’s women lost the match by seven runs, and it was their back-to-back losses. They were bowled out for a score of 218 in 47.4 overs. Shamilia Connell was the star with the ball. She took three wickets for the West Indies. Hayley Matthews and Anisa Mohammed took two wickets each. Campbelle got the “Player of the Match” for her half-century.