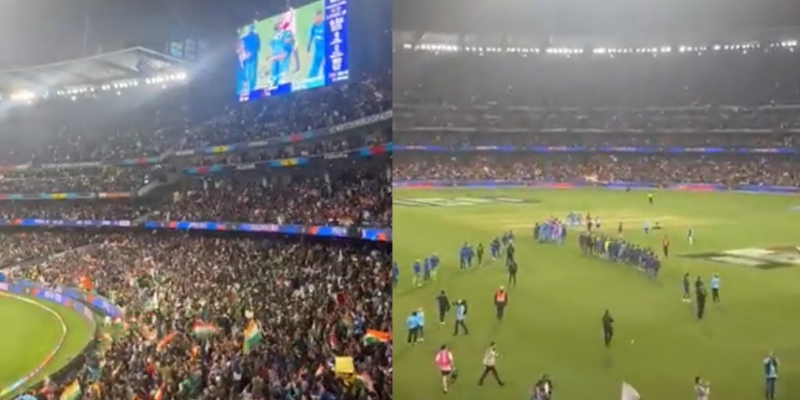 Team India registered a historic victory by defeating Pakistan in the ongoing T20 World Cup today. On this occasion, the stadium was full of spectators. After India’s victory, all the spectators on the stand jumped with joy. During this, all the spectators together did something that made all the cricket fans have goosebump.

Cricket fans are always waiting for the match between India and Pakistan. Whenever these two arch-rivals clash with each other, there is a crowd of spectators in the stadium. This match is not just a match, but the emotions of both the countries are also associated with it. People book tickets well in advance and the ground gets fully packed hours before the match. More than 90 thousand spectators had reached the stadium to see this match.

The joy of the fans was worth watching after what looked like a once impossible victory for the Indian team. This victory was also very emotional for the team after the loss in the Asia Cup 2022. In such a situation, after the victory, the audience together sang the famous song Chak De India.

The video of fans singing a song like this is becoming quite viral on social media. Singing for India in one voice from more than 90 thousand viewers is being loved by people and they say that this video made their day.

Video of the day: 90,000+ crowd singing “Chak De India” after the win against Pakistan at MCG. pic.twitter.com/zz8TxVA7MJ

Let us tell you, batting first, Pakistan scored 159 runs. During this, the pair of Shan Masood and Iftikhar Ahmed batted well for Pakistan and both the batsmen scored half-centuries. In response, the Indian team started poorly and the fans gave up hope of victory. But then, thanks to the partnership of Virat Kohli and Hardik Pandya, who emerged as the hero, India won the match by 4 wickets.