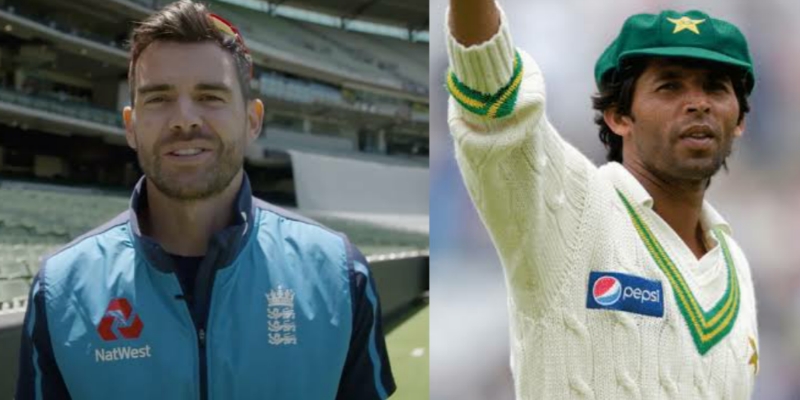 James Anderson is arguably the greatest Test pacer that the game has seen. The Englishman is the highest wicket-taking pacer in Tests at the moment. He finished the Ashes assignment recently and sat down for an interview with Cricket7. In the interview, he talked about various topics, including the Pakistan Tour of England in 2010. In this article, we take a look at the snippets of the interview in which James Anderson names the skill that he learnt from Mohammed Asif.

James Anderson names the skill that he learnt from Mohammed Asif

The 2010 Pakistan Tour of England is remembered for the spot-fixing scandal. Salman Butt, Mohammad Amir and Mohammad Asif had their careers damaged on that tour. James Anderson revealed that he learnt a lot from Asif on that tour.

Speaking about the same, he said, “In summer 2010, we played against Pakistan and Mohammad Asif was bowling this ball which just wobbled a little bit, it was not seaming nor swinging, he was just trying to nip off the seam. So I spent the whole summer practising that and working on it and was comfortable to bowl here [in Australia] which actually brought success for me throughout that series.”

Asif troubled top batsmen like Hashim Amla and AB de Villiers. In 23 Tests, he collected 106 wickets. He had a promising future but ran into controversies too often, which derailed his progress.

Anderson could ponder about retirement soon

Meanwhile, after the Ashes defeat, England might be set for a big change in the Test Team. Although James Anderson was one of the better performers, it might be possible that he could decide to hang up his boots. England needs a lot of newcomers to come through and do well. Otherwise, the next one or two WTC cycles could go for a toss. Therefore, Anderson could make a tough decision.

“They stopped normal celebrations”- Usman Khawaja proud of Pat Cummins and co. for including him in celebration
Urvashi Rautela gives childish reply to fan who asked her about Rishabh Pant’s century
To Top