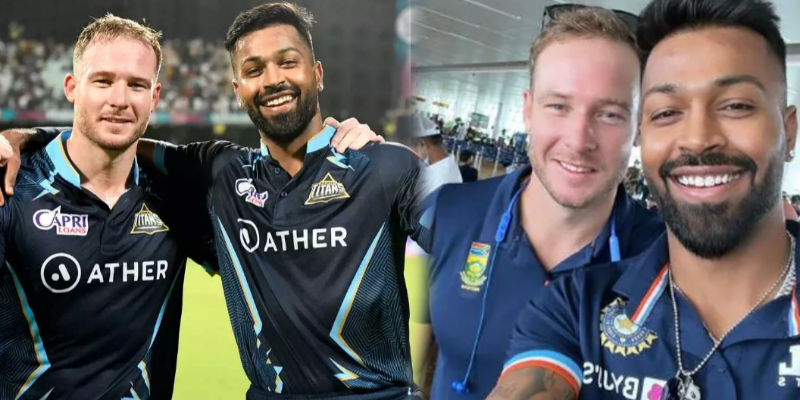 Indian cricket team all-rounder Hardik Pandya had a special wish for his fellow Gujarat Titans teammate David Miller, who played an instrumental knock in the 1st T20I vs India to hand South Africa 1-0 lead in the 5 match series.

Both Hardik Pandya and David Miller were part of the Indian Premier League (IPL) 2022 Trophy winning side Gujarat Titans. Hardik was the captain of the team while David Miller played a key role in the team’s success this term.

But, now that the IPL is over, both Pandya and Miller is now representing their respective national team. They faced-off in the 1st T20I between India and South Africa, where David Miller batted with over 200 plus strike rate to help his team chase down a target of 212 runs.

South Africa have now the early lead in the series with 4 matches still to be played. Before they face off again in Cuttack, Hardik Pandya celebrated his IPL teammate’ birthday and had a hilarious wish for him.

David Miller celebrates his birthday on the 10th of June and Hardik Pandya had a very special remainder for him. Hardik today posted a story on his Instagram where he is pictured with Miller and had written wish for him.

The text in Hardik’s Insta story reads, “Happy birthday my Millie, but IPL is over,” refering to his insane form that Miller has carried over to the series against Team India.

Talking about the match, Ishan Kishan game India a flying start and Hardik Pandya gave it the perfect finishing touch, helping to a very unexpected total of 211 runs given the pitch condition, there were expectation of low scoring encounter.

But, the high scoring drama continued in the 2nd inning as well. David Miller and Rassie van der Dussen played impressive knock of 64 and 75 runs respectively to help South Africa win the match by 7 wickets.

“Pant made a small mistake” – Former Indian player highlights the error made by skipper Rishabh Pant against South Africa
Ravi Shastri thinks not time yet to select Umran Malik into India squad for T20 World Cup 2022, here’s why
To Top