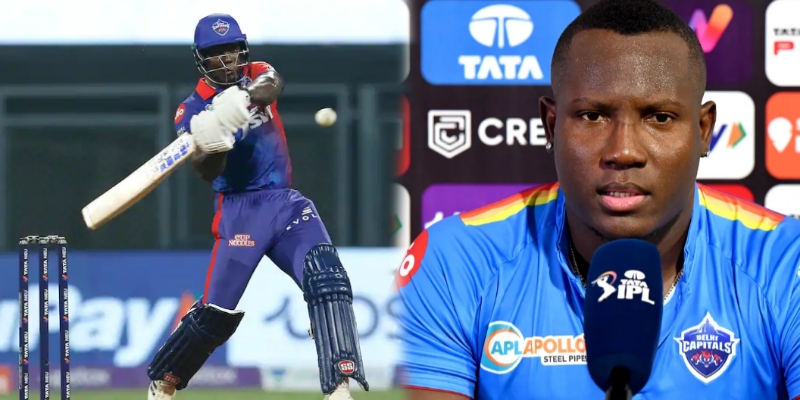 Delhi Capitals’s Rovman Powell is making headlines after his hard-hitting batting most recently against the Sunrisers Hyderabad, hitting 102 meter Six to Umran Malik. But the batter believes that he can hit 130 Meter Six.

Rovman Powell was bought by Delhi Capitals (DC) during the Indian Premier League (IPL) 2022 Mega Auction. Powell played a blistering innings of 67 runs in 35 balls against Sunrisers Hyderabad (SRH) in the most recent match. He also hit 3 fours and 6 sixes as part of his inning. One of these sixes, Powell hit Umran Malik for 102 meters.

If the West Indies batsman is to be believed, then his next target is to break Liam Livingstone’s record of 117 meter long six, and at the same time he also wants to hit a 130m six as well. According to him, the batsman should not go into hitting too fast shots, just hit the ball with his timing.

Powell feels that he can break the record for the biggest Six in the IPL on a good batting pitch. Let us inform you that the record of hitting the biggest six in IPL history belongs to the name of Albie Morkel, a 125 meters Six he hit in the year 2008.

Rovman Powell told IPLT20.com that he can break the record of hitting the most longest Six in the history of the Indian Premier League (IPL). He said that the player’s position should be strong and that he gives himself a chance and go deep into the crease and hit the ball.

“I think I can get there, I even said yesterday to Mandeep that I am going to hit the ball close to 130m. Let’s see how it goes,” said Powell.

Coming to bat first, Delhi Capitals (DC) had a poor start and the first wicket fell in the very first over without opening an account. But David Warner and Rovman Powell’s unbeaten 122-run stand helped the team score 207 runs in 20 overs. Warner played an unbeaten knock of 92 runs in 58 balls while Rovman Powell scored 67 runs in 35 balls, also remaining not out.

In reply, Nicholas Pooran scored 64 runs in 34 balls for Hyderabad, but the absence of any batsman proved wrong for the team and Delhi won the match by 21 runs.

Tristan Stubbs: Who is the new recruit of the Mumbai Indians for IPL 2022 ?
“Tears were coming out of his eyes” – Micheal Hussey reveals the moment MS Dhoni breaks down during CSK’s 2018 comeback
To Top