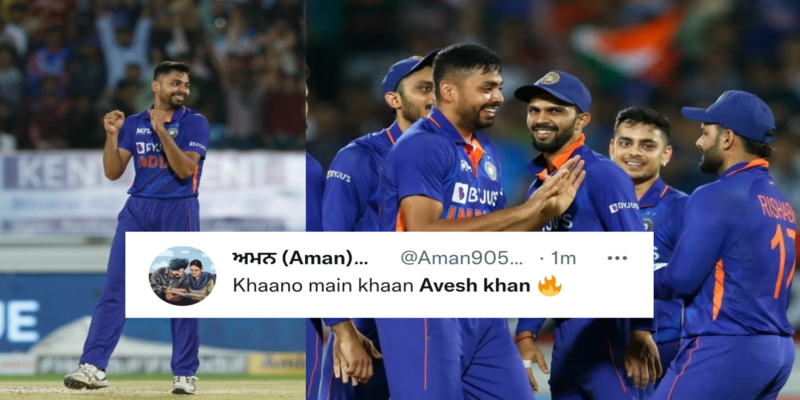 The Men in Blue have thrashed the visitors in two successive matches by a massive margin. India won the match by 82 runs, defending the target. South Africa, on the other hand, bundled out for their lowest-ever total of 87 runs. this win, the home team has levelled the series at 2-2 with the final match to be played on Sunday.

The Indian bowlers once again delivered the job for the team and did an excellent work. But the star with the ball was the man who went wicketless in the first three matches. Avesh Khan registered his career best figure of 4/18 in his four overs to win India the match.

Rishabh Pant lost his fourth successive toss loss in the series, and Temba Bavuma asked India to bat first. India had a very poor start and were struggling at 56/3 in the first ten overs. But in the end, a cameo from Hardik Pandya and Dinesh Karthik totally changed the whole scenario. Hardik scored 46 off 31 balls and DK scored his maiden fifty.

He scored a brilliant 55 off 27 runs to help India reach 169/6. The Indian bowlers once again started well and took three wickets in the power-play. However, Avesh just bowled some exceptional line and length and certainly gave a perfect reply for those who were questioning his place in the team.

Twitter Reacts on the Brilliant spell from Avesh Khan

Avesh Khan did not get a single wicket in first 3 games.
Tonight he got three in one over!#INDvSA #INDvsSA #SAvIND

Everyone wanted Avesh Khan to make way for Umran Malik. He made a comeback after going wicketless in the series and he won us the game tonight. Kudos to Dravid and selectors for backing him. ✨#INDvsSA pic.twitter.com/uQYKhwMn2v

And that's how you wish your father an happy wala birthday
Doing your best performance for the country on that day
4-18-4
Avesh khan is truly a papa's boy ❤@Avesh_6 #INDvSA #aveshkhan pic.twitter.com/qIhpcq31KL

Just when people were asking to drop Avesh khan, he took 4 wickets 😂.

“Can Wait for a top order of Rohit, Rizwan, Babar, Kohli” – Twitterati reacts as Afro-Asia Cup is expected to return in 2023
“Here we go again” – Twitter reacts as Wasim Jaffer and Michael Vaughan resumes Twitter banter before the 5th Test match
To Top