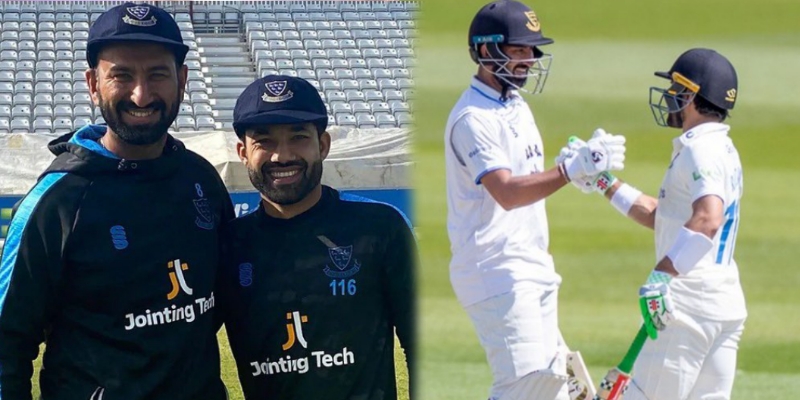 Indian cricket team’s Test specialist batsman Cheteshwar Pujara has had an outstanding season in the English County Championship, which resulted in a return to the Indian team for the upcoming Test series in England.

Cheteshwar Pujara was told that he is surplus to requirement after the batter’s mediocre performance in the away Test series against South Africa earlier this year, which Team India lost. Reports at that time stated that Pujara was told he will be replaced in the team.

After once again being ignored by the Indian teams for an Indian Premier League (IPL) contract, Pujara decided to head to England to play in the English County Championship.

He signed for the Sussex County Cricket Club for the season in the Division 2 of the tournament. There, he paired up with neighbouring country Pakistan’s wicketkeeper batsman Mohammad Rizwan.

The duo made headline throughout the season for their stunning performance. While India and Pakistan is know for its rivalry in the cricketing world, it was so heartwarming to see the duo play together.

Rizwan and Pujara became just a good friend that Rizwan most recently praised the Indian batter. And now, the Indian star has returned the favour. Pujara today took to his social media handle to post birthday wishes for Rizwan.

The Indian right-hand batsman today posted a picture of him and Mohammad Rizwan standing together and the caption states, “Happy birthday @iMRizwanPak! Have a fabulous year ahead.”

Cheteshwar Pujara had a brilliant stint with the Sussex team as the Indian star batter scored 720 runs from 5 matches, that included 2 double centuries. As a result of his performance, Pujara has been selected for the upcoming rescheduled 5th Test match against England, to be played in July.