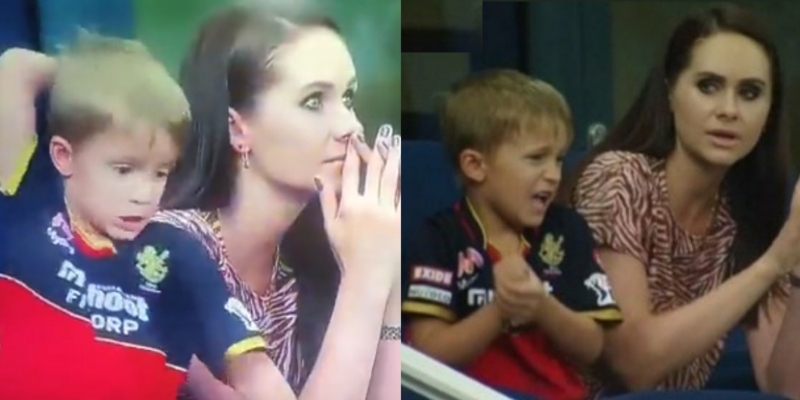 Royal Challengers Bangalore defeated Mumbai Indians by 54 runs and have made their path comfortable in the race to the playoffs of IPL 2021. While Harshal Patel and Glenn Maxwell dominated the proceedings, a short clip of AB de Villiers and his son is also going viral. In this article, we tell you more about the incident in which AB de Villiers gets out, and his son hurts himself while expressing frustration.

After Devdutt Padikkal got out, RCB were in trouble as the youngster had been consistently making runs for them. However, the likes of KS Bharat, Virat Kohli and Glenn Maxwell helped RCB get past 160 although they could have got even more.

In the second innings, the openers of Mumbai Indians started well. They dominated the RCB bowlers in the powerplay, but in the middle-overs, they fell apart. Wickets fell consistently, and in the end, RCB pulled off a comfortable victory. With this, their place in the playoffs looks almost assured unless there are any major surprises.

AB de Villiers has not struck big in the UAE phase of IPL 2021. However, in the game against Mumbai Indians, he looked to be in the mood. Against Jasprit Bumrah, within the very first few balls itself, he took him over the top. However, a few balls later, AB de Villiers got out to the in-form bowler. The cameras panned to the place where ABD’s family was sitting, and soon after the wicket, his son expressed his frustration by hitting his hand at an object in front of him and in turn, hurt himself.

So quite abd son pic.twitter.com/AjKOljJzEU