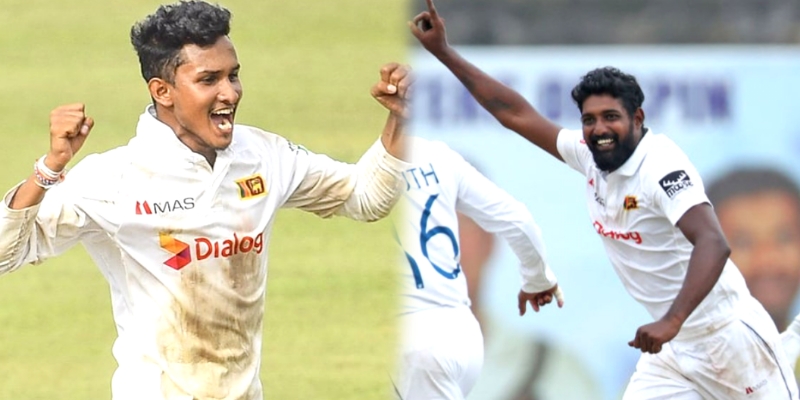 In an interesting 2nd match of the 2 match Test series between Sri Lanka and Australia, it is the hosts Sri Lanka who came out victorious after Dinesh Chandimal starred with the bat while debutant Prabath Jayasuriya took 12 wickets in what was his debut match.

After losing the first of the 2 match series, Sri Lanka showcased their dominant fashion, beating Australia by an inning and 39 runs after taking a mammoth lead in the first inning.

Batting first, Australia scored 364 runs riding on Centuries from Steve Smith and Marnus Labuschagne, both adding 104 and 145 runs respectively. Meanwhile, in response to that, Sri Lanka posted 554 runs with a double hundred from Dinesh Chandimal. While chasing Sri Lanka’s lead, the Kangaroos were all-out for just 151 runs in their 2nd inning, giving Sri Lanka the victory by an inning and 39 runs.

While Dinesh Chandimal was the star with the bat for the Lankan Lions, it was the debutant Prabath Jayasuriya, yes a Jayasuriya, who starred with the ball in his debut match, taking a total of 12 wickets in the match.

He scalped 6 wickets for 118 runs in the first inning, then adding a further 6 wickets for 59 runs. Today in this article, we take a look at 5 players who took a total of more than 10 wickets in debut Test match.

At first place in our list is former India international Narendra Hirwani, who took a total of 16 wickets in a match against West Indies in the year 1988. He took 8 wickets in the first inning for 61 runs in 18.3 overs. He continued his impressive performance in the 2nd inning too, taking 8 wicket for 75 runs 15.2 overs.

In 2nd place in our list is Robert Massie, the former Australia medium pacer. He achieved the feat in the year 1972 against England. He too took a total of 16 wickets. He bagged 8 wickets in the first inning for 84 runs in his 32 overs. He went to take further 8 in the 2nd inning, just giving away 53 runs in 28 overs.

At number three in the list is former Australia off-spin bowler Jason Krejza, who took a total of 12 wickets in a match against India in the year 2008. Bowling first, he scalped 8 wickets by giving away 215 runs in his 44 overs. In the 2nd inning, he then took 4 wickets for 143 runs in 31 overs. However, India still won that match.

Sri Lankan left-arm orthodox bowler Praveen Jayawickrama is another player who bagged more than 10 wickets in a match. It was in 2021 when Jayawickrama took 6 wickets for 92 runs in the first inning and then further 5 wickets in the 2nd inning against Bangladesh.

Sri Lanka’s pacer Prabath Jayasuriya is now the latest to join the list. The bowler did the feat against a mighty team like Australia when he took a total of 12 wickets in the match. He took 6 wickets for 118 runs in the first inning and then another 6 wickets for 59 runs in the 2nd inning as Sri Lanka beat Australia by an innings an 39 runs.