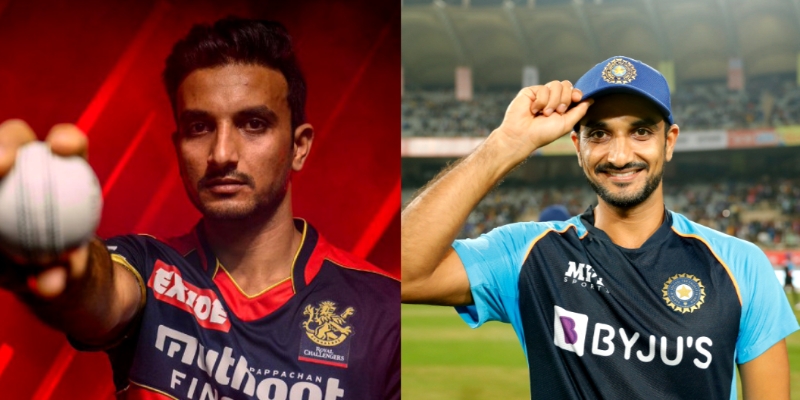 The Indian Premier League (IPL) franchise Royal Challengers Bangalore (RCB) is one of the most popular team in the history of the IPL. The team boasts of some really great star players in the squad.

While the Royal Challengers Bangalore (RCB) have failed to win any IPL Trophy in its history, the team is still one of the most popular IPL franchise. The team has some star players in the team, the likes of Virat Kohli, Glenn Maxwell, Faf du Plessis to name a few.

Other than, RCB have also played a key role in nurturing young players and have found some gems from the domestic circuit who have gone on to represent the Indian team or have got called-up to the Indian team.

Today in this article, we take a look at 3 Royal Challengers Bangalore (RCB) who have received call-up to the Indian team in the last 2 years.

Harshal Patel won the Indian Premier League (IPL) Most Valuable Player (MVP) and the Purple Cap in the IPL 2021 edition to help the RCB side to qualify for the playoffs. He was called-up to the Indian team after the T20 World Cup 2021 and has established himself as a quality addition into the team. Patel has so far played a total of 17 T20I matches and has picked-up 23 wickets for the Men in Blue. He has unfortunately though been ruled out of the ongoing Asia Cup 2022 due to injury.

Left-handed opening batsman Devdutt Padikkal has a very big future ahead of him. He became an instant hit for the Royal Challengers Bangalore (RCB) after making IPL debut in 2020. He played for RCB in 2020 and 2021 and earned a call-up for the Sri Lanka series in 2021. He though now plays for the Rajasthan Royals after the mega shake-up in the IPL 2022 Mega Auction.

Royal Challengers Bangalore (RCB) all-rounder Shahbaz Ahmed has slowly slowly got himself into the RCB first XI in the IPL 2022. However, he has been consistently doing well for the Bengal team in the domestic circuit. He is one of the most valuable player for the Bengal side.

Though he is yet to make his debut for the Indian team, he received his first-ever call-up to the Indian team for the Zimbabwe series as replacement for Washington Sundar. With that, it also confirms that Shahbaz is in the planning of the selectors.