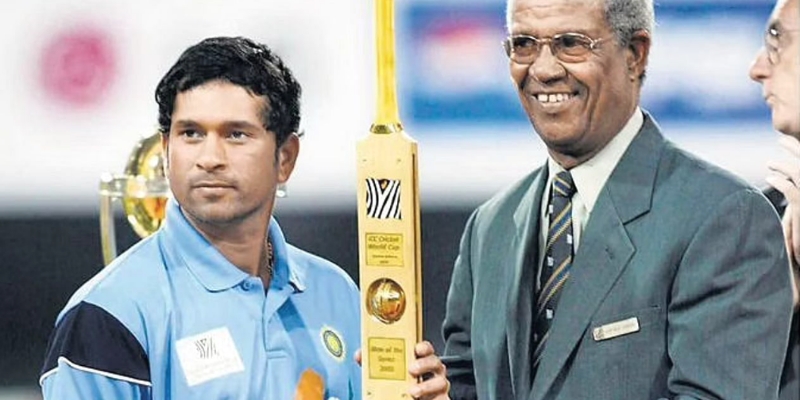 It is every player’s dream to play for their respective country in the cricket’s biggest carnival, the ICC Cricket World Cup. There is no dearth of talent in the Indian team. There are many great players in the Indian team from domestic cricket to senior level. Not everyone gets a chance to play in the World Cup.

The Indian team has won the ICC ODI World Cup title twice. Apart from this, once, the team had to face defeat in the final. Today, in this article, we discuss about three Indian players who won the Golden Bat by scoring the most runs in a World Cup edition.

The first name is our list is obviously the God of Cricket, Sachin Tendulkar. Sachin scored the most runs in the 1996 World Cup as he scored 523 runs in just 7 matches in the competition. During this, he scored two centuries and three half-centuries. For his impressive performance, he became the first Indian batsman who won the Golden Bat award in a World Cup. It must also be noted that Sachin won the Golden Bat in the 2003 World Cup as well, scoring 673 runs from 11 matches, but India lost the final to Australia.

Rahul Dravid, who is considered a wall in Test cricket, has also performed tremendously in ODIs. Rahul Dravid won the Golden Bat in the 1999 World Cup. During this, Dravid scored 461 runs in 8 matches, which also included 2 centuries and 3 half-centuries, with his highest score of 145 runs in the tournament. The three individual high scores in this World Cup were all Indians and these were Sourav Ganguly, Rahul Dravid and Sachin Tendulkar.

Rohit Sharma needs no introduction in world cricket. In the World Cup played in England in 2019, he played his dunk all around. Every team faced trouble before him. Rohit Sharma played eight matches in this edition of the World Cup and scored 648 runs. During this, he captured the Golden Bat by scoring 5 centuries and one half-century.