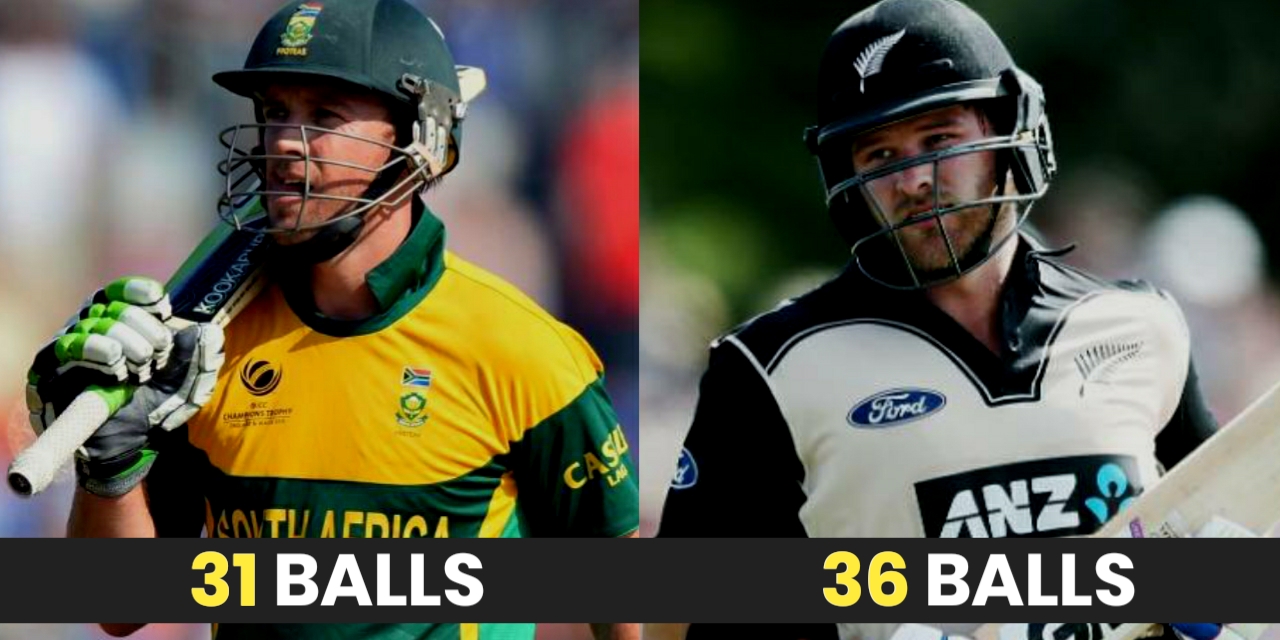 Modern batters have modified their abilities to be aggressive right from the first delivery. They’ve also developed ways to sustain that intensity for extended periods of time and score big in ODI cricket. When a player smashes a ton, he has already kept his team ahead in the game. But scoring a century at a fast pace takes the game completely away from the opposition.

The introduction of global T20 leagues have seen this approach acquired by the majority of the batters. On that note, let’s take a look at the top 10 fastest centuries in ODI cricket.

10. Kevin O’Brien – One of the fastest centuries in ODI cricket (50 balls)

Kevin O’Brien is ranked tenth among batters with the fastest ODI century. During the 2011 World Cup, O’Brien put forth an incredible performance against England to etch his name in record books. The all-rounder scored a magnificent ton in just 50 balls to help Ireland chase a total of 328.

His knock of 113 included 13 fours and six maximums. He scored at a strike rate of 179.36 to cause a great upset in the World Cup.

Sanath Jayasuriya was a gem for Sri-Lankan cricket owing to his explosive batting skills. He notched a quickfire century against Pakistan in 1996 and showcased his skills. Despite battling against some of the Pakistani greats, he didn’t hesitate to take them on.

Jayasuriya went on to score a brilliant 134 runs in just 65 deliveries. He smashed 11 fours and as many sixes in his knock of 134 to help Sri Lanka post 349 runs on the board.

Jos Buttler is one of the most hard-hitting batsmen in modern days. He displayed his brilliance against Pakistan in 2015 when he went out blazing all guns.

Buttler scored a 46 ball hundred which included 10 fours and 8 maximums. His knock of 116 helped England register 355 runs and clinch an easy victory.

7. Jesse Ryder – One of the fastest centuries in ODI cricket by a Kiwi (46 balls)

Jesse Ryder was a destructive New Zealand opener whose career was shortened due to off-field reasons. In a match against West Indies in 2014 which was reduced to 21 overs, Ryder was at his absolute best.

Ryder took the attack from the first ball and smashed a 46 ball century. He struck 12 fours and 5 sixes guiding New Zealand to a formidable total of 283.

6. Shahid Afridi – One of the fastest centuries by him in ODI cricket (45 balls)

Shahid Afridi was a veteran of Pakistan cricket and has delivered several quickfire knocks. His one such knock came against arch-rivals India in 2005.

Afridi was in beast mode when he smashed the Indian bowlers all around the park. The all-rounder put on an exceptional ton in just 45 deliveries which included 10 fours and nine maximums. His knock helped Pakistan chase a total of 250 with ease.

One of the greatest players ever to play the sport, Brian Lara’s name is no surprise in this list. The West Indian legend has produced several great knocks and his inning against Bangladesh in 1999 was just one of them.

Opening the innings, Lara took charge and smashed the ball all over the park to register a splendid 45-ball century. His knock included 18 fours and four maximums which helped the Windies win the game easily.

4. Mark Boucher – One of the fastest centuries in ODI cricket by an African player (44 balls)

Mark Boucher was known for his brilliant wicket-keeping and for playing cameos in the end. However, the South African was in a different mood against Zimbabwe in 2006.

Boucher unleashed his weapons against the Zimbabwe bowlers and scored a magnificent 44 ball century. He went to notch 147 runs in 68 balls including 8 fours and 10 maximums. Interestingly, this was the only century for the wicket-keeper batsman in ODI cricket.

The Pakistani all-rounder Shahid Afridi features once again in this list and this time at the third position. Coming at No.3, Afridi turned into a beast as he attacked the Sri Lankan bowlers mercilessly.

He produced a splendid inning as he scored a 37 ball ton which was the then fastest century in ODI cricket. His knock included six fours and 11 maximums aiding Pakistan to reach a total of 371.

Corey Anderson came into the limelight after his quickfire knock against West Indies in the same match when Jesse Ryder scored a 46 ball ton. Anderson bettered the record as he went out blazing all guns against the Windies bowlers.

He struck all over the park with ease and brought up his century in just 36 balls to break Shahid Afridi’s long-standing record. He scored 131 runs in just 47 deliveries including 6 fours and 14 sixes to enter his name in the record books.

Last but not the least, AB De Villiers holds the top position for the fastest century in ODI cricket. It’s no big-brainer that the South African superstar holds this record. De Villiers was in a different zone when he came out to bat against the West Indies in 2015.

Coming in the 39th over, no one would have expected him to notch a ton. However, De Villiers did the impossible as he scored a century in just 31 balls. He went on to score 149 runs in just 44 deliveries which is to date unimaginable. He struck nine fours and 16 massive sixes to create a world record.

Which players have played for 2 countries in ICC T20 World Cup?
A Strong Playing XI of cricketers who have retired in 2021
To Top