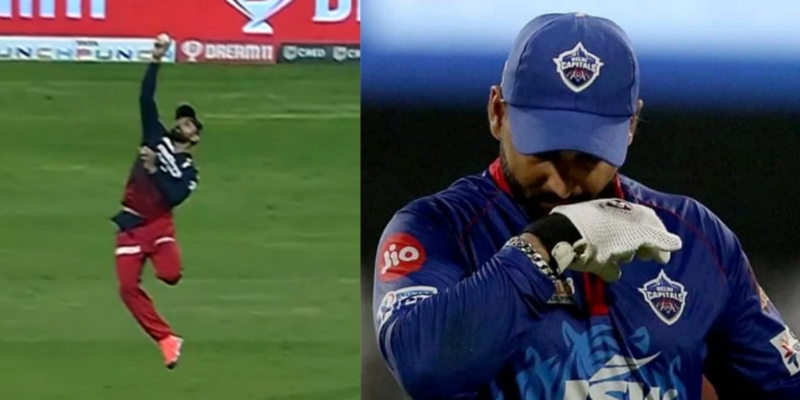 During the match, the team’s star batsman Virat Kohli could not contribute much for the team with his bat, but while fielding, he took blinder of a catch and the video of which is now going viral on social media.

Actually, during the match, Virat Kohli scored only 12 runs in 14 balls, after which he was run out on Lalit Yadav’s direct throw. However, after this, Virat Kohli took revenge of his wicket during fielding by taking a brilliant catch of the Delhi Capitals’ captain Rishabh Pant to send him back to the pavilion.

This incident happened in the 16th over of Delh’s innings. Pant wanted to play a big shot on the third ball of Mohammad Siraj, but he lost his balance while playing the shot, after which the ball went towards extra cover. Virat was fielding in that direction for RCB, in such a situation, seeing the ball coming, Kohli demonstrated his fitness and jumped in the air and caught Pant with one hand.

Virat plucks a mango out of thin air @imVkohli 🥵🥵 pic.twitter.com/mL4aCk0uwh

Talking about the match, Royal Challengers Bangalore had a really bad start to the match, losing 5 wickets for 92 runs, but then came Dinesh Karthik, who is probably in the best form of his life, scoring a quickfire 66 runs from 34 balls, helping RCB to take its total to 189 runs with no further wicket loss.

In response, Delhi scored 173 runs for the loss of 7 wickets. David Warner played an inning of 66 runs and Pant scored 34 runs, but in the end, lost the match by 16 runs.