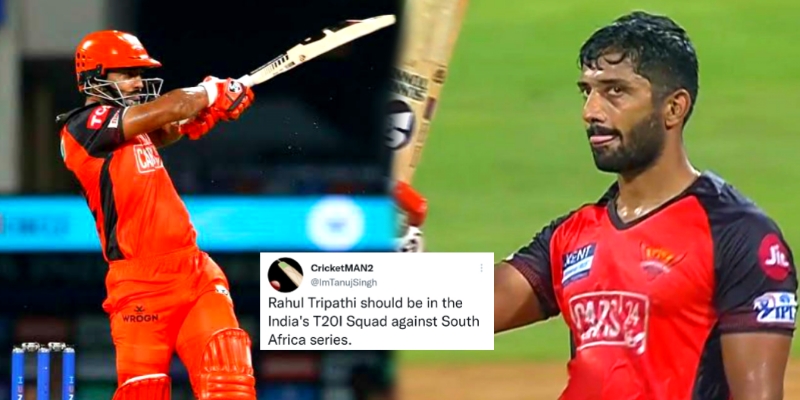 Sunrisers Hyderabad’s Rahul Tripathi has set a benchmark and has surely out himself under the radar of the Indian cricket team selector after his great showing with the bat in the match against Mumbai Indians tonight.

With the race of top 4 getting tougher and tougher, match number 65 of the Indian Premier League (IPL) 2022 is being played between the Sunrisers Hyderabad and Mumbai Indians in Mumbai’s Wankhede Stadium.

It was home team’s captain Rohit Sharma who won the toss and opted to field first. However, it all went wrong for them as Sunrisers Hyderabad got off to a blistering start, thanks to a brilliant batting display from Priyam Garg.

But, after the youngster was dismissed, from there on, Rahul Tripathi took control of the inning and went on to score a brilliant 76 runs from 44 balls, that included 9 fours and 3 sixes at a strike rate of 172.

After his tonight, fans on Twitter are demanding that Tripathi be given a run in the Indian team and should be selected for the upcoming South Africa T20I series to be played in June.

What a player, what a season for him. pic.twitter.com/KTbdiTWvNj

Should Rahul Tripathi be selected in the Indian team for SA series? #MIvSRH #IPL2022 pic.twitter.com/O85gjM5YVO

If Rahul Tripathi doesn’t play for India, it’s our own loss.

Rahul Tripathi should be in the India’s T20I Squad against South Africa series.

Will be a tragedy if Rahul Tripathi doesn’t get into Indian team for South Africa.

More than anyone, Rahul Tripathi deserves to be in Indian squad for upcoming T20I series against South Africa. #IPL2022 #SRHvMI