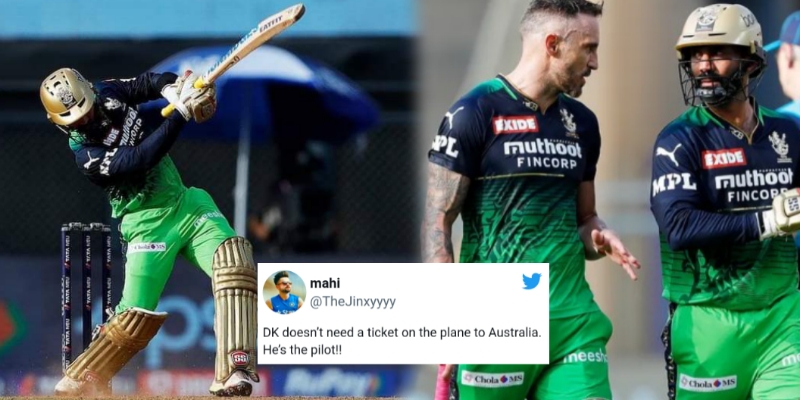 Karthik made his T20 debut in 2006 when India toured South Africa – this was India’s first international T20 match as well – and has played 32 games for India. A veteran of 218 IPL games, the former KKR skipper is slowly turning out to be a showstopper.

Dinesh Karthik has been nothing but a revelation this IPL. With a score of 30 from just 8 balls and hammering at a strike rate of 375, the RCB wicket-keeper managed to halt celebrations briefly in the SRH camp. With four sixes and a boundary, Karthik’s performance was praiseworthy and exceptional to watch.

After Virat Kohli’s dismissal on the golden duck, Faf du Plessis, Rajat Patidar, and Glenn Maxwell played a massive role in contributing runs for the team. However, Patidar and Maxwell got out on 48 and 33. It was Karthik’s turn to enter the field. After running for two, Karthik smashed a six against Kartik Tyagi in the second last over. In the last over Karthik hit three sixes and a boundary against Fazalhaq Farooqi and finished the innings for RCB in style, yet again.

Even RCB skipper Faf du Plessis said that he was trying to get out because of tiredness and to get the inform Dinesh Karthik in to smash in the death overs. Faf also mentioned that he thought retiring hurt at some point of time.

A strike rate of 200 after 12 innings while scoring 274 runs at 68.50, Royal Challengers Bangalore’s designated finisher Dinesh Karthik has taken the 15th edition of Indian Premier League by storm. The wicketkeeper-batter is literally giving jitters to death overs bowlers in the league.

We all know Dinesh Karthik is enjoying a dreamy season in IPL 2022 but his ultimate dream is to play for India in the upcoming T20 World Cup for India.

Indian fans believe that has booked his place in India’s squad for the upcoming T20 World Cup. Since Captain Rohit Sharma and star batsman virat are out of form it is safe to go with some in form players like Dinesh Karthik it will be a bonus for the Indian Cricket team. Indian fans believe Karthick will be a huge asset for the team and a big headache for the opposition bowlers in death overs.

DK doesn’t need a ticket on the plane to Australia. He’s the pilot!! pic.twitter.com/uUcFGAmKgB

DK easily is the best buy of RCB this season man. Insane finisher and one that doesn't take an overseas spot. Huge pick.

Comes in with just 10 balls to go.
Plays the most impactful knock of the innings. Smiles. Leaves. Just DK things. #SRHvRCB #IPL2022 pic.twitter.com/yHu5gXDGRb

If DK not selected to T20I… Rohit, Dravid should resign themselves… Dissolve BCCI.

Who thinks we are going to see
Dinesh karthik as finisher in T20
World cap pic.twitter.com/qXhXcZKUE4

“Don’t compare Hasaranga and Chahal” – Twitter reacts to Wanindu Hasaranga leading RCB to victory with 5-fer against SRH
“What a day for the IPL”, Twitter reacts as Sai Kishore finally makes his IPL debut
To Top