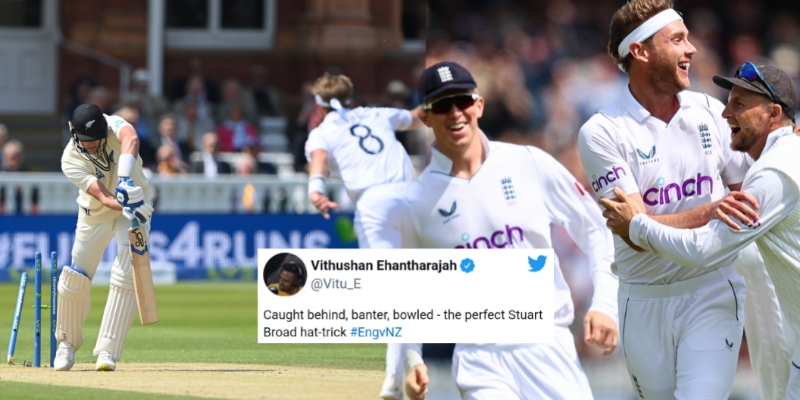 The England vs New Zealand Test match has reached its peak as English bowlers did tremendous job to stop New Zealand from putting on a big total on the board.

The first of the scheduled 3 match Test series between host England and New Zealand is currently underway in London’s Lord’s cricket ground, where England have somewhat taken control of the match, thanks to a brilliant bowling display from James Anderson and Stuart Broad early in the morning of Day 3.

The day 2’s play ended on a solid note for the Kiwis as they managed to recover from an early collapse. Trailing by 9 runs after first inning, New Zealand had lost 4 wickets for 56 runs in their 2nd inning. However, Daryl Mitchell and Tom Blundell ensured that Blackcaps still went on to stumps on 236 runs without losing any further wicket.

Daryl Mitchell converted his overnight score to Hundred before Stuart Broad his hat-trick, taking claimed 3 wickets in 3 balls to break all the rhythm of the Kiwi batters. It must be noted that it was not an official hat-trick since the 2nd wicket was a run-out.

New Zealand have taken a 276 runs lead after that and has set-up a target of 277 runs for England. However, today’s play so far will be remembered for outstanding bowling display from England bowlers, especially Stuart Broad and James Anderson.

This is why test cricket is just the best… #ENGvNZ

No matter what test match cricket is always splendid to watch. Every over, every minute, every hour, every session, everyday is always different. You can never predict what happens next 🏏 #ENGvNZ

Delightful fightback from England. Now come on the batpeople – do the batting. #ENGvNZ