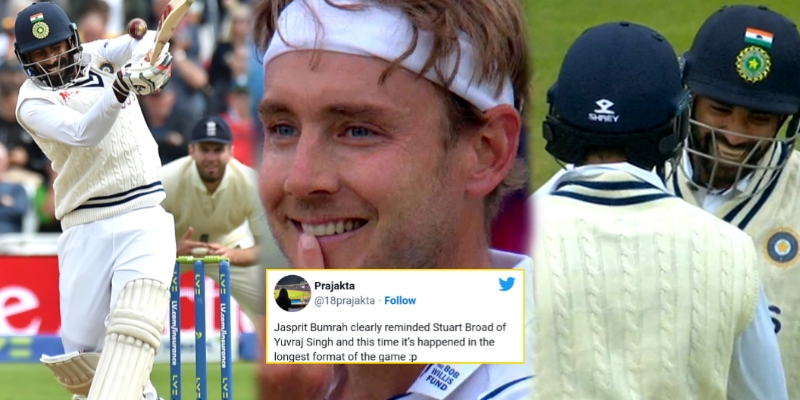 The day 2 of the play at Birmingham is currently on as Team India resumed from its overnight score of 338 runs with Ravindra Jadeja and Mohammed Shami at the crease.

While Jadeja went on to complete his Century, Shami also utilised the short balls to a great extent, scoring 16 runs that included 3 boundaries.

However, the talk of the day so far is Jasprit Bumrah’s performance with the bat. Coming in at number 10, Bumrah scored 31 runs, but he smashed Stuart Broad for absolute madness, scoring 35 runs in a over.

The over began with Bumrah hitting Broad for a four off the first ball, and then followed it up with byes four on wide because of the height of the ball and a Six of the no ball and then another boundary to score 24 runs from the first 3 official balls, excluding the wide and no ball.

He then once again scored 4 and 6 off the next two balls and then took a cleaver single of the last ball to take the strike. It must also be noted that it is now the biggest over in Test cricket history, giving away 35 runs.

Quite surprisingly though, Jasprit Bumrah has been made the Indian team captain for the Test match because Rohit Sharma has contracted COVID. And his batting has left fans awestruck. Check-out how Twitterati reacted.

Jasprit Bumrah clearly reminded Stuart Broad of Yuvraj Singh and this time it’s happened in the longest format of the game :p#ENGvIND

BOOM BOOM BUMRAH IS ON FIRE WITH THE BAT 🔥🔥

Remove your ‘Jasprit Bumrah’ mask and show us your face, Yuvraj Singh.

We grew up between these two pics #Yuvi #Bumrah pic.twitter.com/jYmdLmoZsh

Dugout can’t believe the madness with the bat from captain Jasprit Bumrah. pic.twitter.com/D5G2Fa3z7L