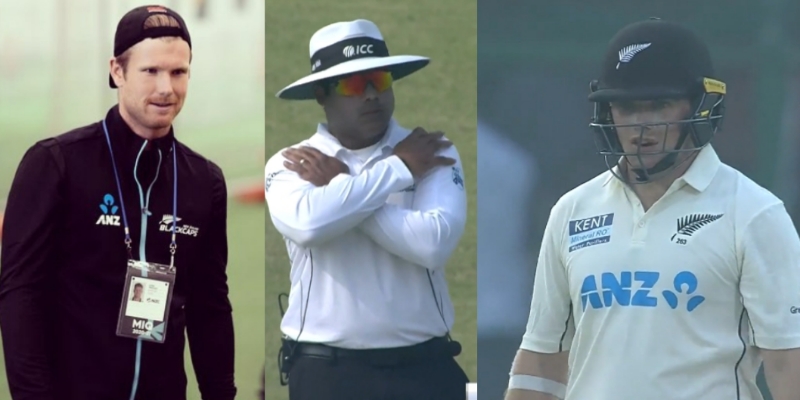 Team India put up 345 runs in the first innings of the Kanpur Test against New Zealand. While many expected that the Kiwi batsmen would fall prey to the Indian spinners, so far, the New Zealand team has not lost a wicket. Day 2 was also riddled with a couple of umpiring errors. In this article, we take a look at how Jimmy Neesham reacted after Tom Latham overturns the umpire’s decision thrice against India.

Although there was a slight blip, Shreyas Iyer maiden century helped India post a decent total on the tricky pitch. The team was also aided by the lower-order contributions of Ravindra Jadeja and R Ashwin. The Kiwi pacers were excellent throughout the Indian innings.

With the bat, both Will Young and Tom Latham have started well for the Kiwis. At the end of day 2, the Kiwis are 129-0 with both the openers having got to their fifties. The Indian spinners were expected to wreak havoc but they have not been able to do that. Day 3 will be crucial for both teams as to how the game would progress.

Meanwhile, there were a few umpiring howlers in both innings. Especially while the Kiwis were batting, the openers were given out on multiple occasions and they had to overturn the decision using DRS. James Neesham reacted hilariously to this.

When the DRS was started, Team India was slightly hesitant to adopt it. However, they did it once after all the other teams started using it. James Neesham took reference to this and fired a sarcastic line. Tom Latham is currently batting on 50 and it needs to be seen as to how the Kiwi all-rounder would react if Latham gets to his century.

Shreyas Iyer’s dad explains why he did not change His Whatsapp DP since 2017
Watch: Umpire Aleem Dar Gets Dangerously Hit On His Head In T10 League
To Top