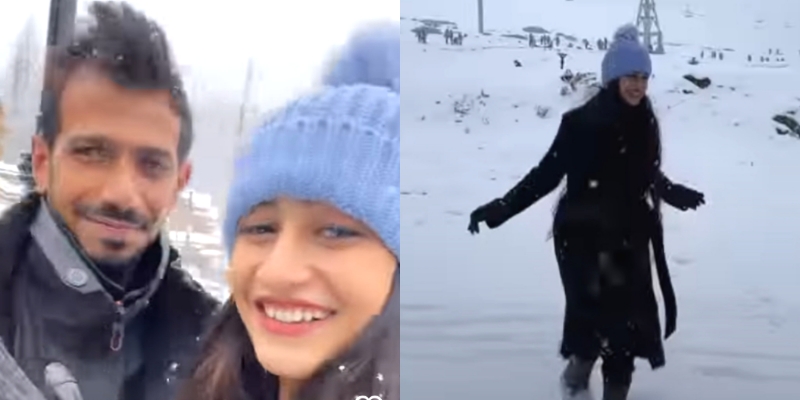 Indian cricket team’s leg spin bowler Yuzvendra Chahal is away from the International cricket at the moment. The leg spin bowler now constantly gets ignored for the Indian team during the team selection.

But, the Haryana based bowler is making the most of it as he is having fun in Jammu and Kashmir with his wife Dhanashree Verma.

Dhanashree has just recently shared a video clip on her social media account in which Chahal is also seen with her on the Snowy mountains of the Jammu and Kashmir. During this, Dhanashree is seen dancing on ‘Tip-Tip Barsa Pani’ song.

Dhanashree Verma is always very active on social media. She shares dance videos on her Instagram account quite and all ends up getting viral.

A similar video clip was shared by Dhanashree on Friday, in which Yuzvendra Chahal is also seen with her. They have shot this video in Gulmarg in Jammu and Kashmir. In that video, the opening clip saw Yuzvendra Chahal and Dhanashree Verma together, after which, Dhanashree shows her dancing skills on the snow.

She wrote in the caption of this video, ‘Tip-Tip Barsa Snow. If I have to be super honest, the beauty of this place and the heavenly nature around can definitely teach you a lot of things, appreciation, blessings and inner peace.